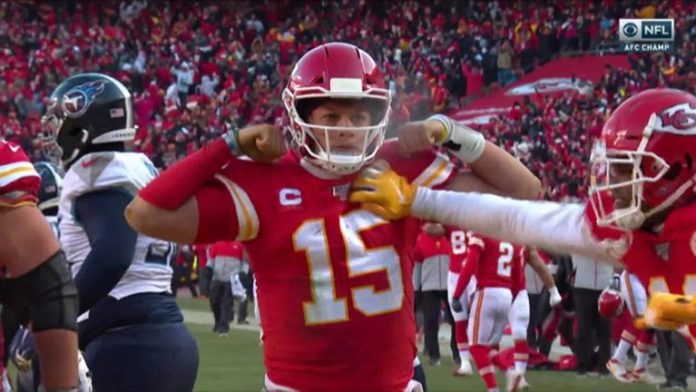 And then there were two. Just the Kansas City Chiefs and the San Francisco 49ers remain standing in the race to lift the Vince Lombardi Trophy in the NFL’s 100th season.

A mouth-watering Super Bowl awaits us all in Miami on Sunday, February 2. Here are my six big talking points following an intriguing Championship Sunday that saw the Chiefs and Niners advance to the big dance.

Kansas City quarterback Patrick Mahomes is playing at such a high level it is hard to fathom he is coming to the end of just his second season as an NFL starter. Mahomes can throw the ball a mile, he kills defenses with his accuracy and he is hurting playoff teams with his legs, as evidenced by that touchdown run for the ages at the end of the first half on Sunday night.

Patrick Mahomes inspired the Kansas City Chiefs to a 35-24 win over the Tennessee Titans to clinch a spot at the Super Bowl in Miami.

Lamar Jackson has garnered a lot of attention this season and rightly so. He should be the MVP of this season. But Mahomes is the quarterback most likely to set his team up for an extended period of success and I think he is the best in the game. I cannot wait to watch him doing his thing in Miami.

If at first you don’t succeed…

Try, try again is what the old adage suggests. But surely once you have rolled through six NFL teams, you consider calling it a day? San Francisco running back Raheem Mostert said this week he became “immune to being cut” during brief stays with Philadelphia, Miami, Baltimore, Cleveland, New York Jets and Chicago.

During those stops, Mostert did not carry the football a single time in the regular season. But now he is on top of the football world heading to Miami. Mostert ended the regular season as San Francisco’s primary back and he was unstoppable against Green Bay, carrying 29 times for 220 yards and four touchdowns. He is sure to be one of the feel-good stories of Super Bowl week.

They will spend all of Super Bowl week talking about how this game is not about them but about their respective teams. But a Super Bowl victory will mean the world to Kansas City’s Andy Reid or Kyle Shanahan, of the 49ers. Kyle’s dad, Mike, won two with the Denver Broncos and Kyle will want to make amends for his role in Atlanta blowing a 28-3 lead and losing to New England three years ago.

NFL Championship games as they happened

Recap and highlights as the 49ers beat the Packers after the Chiefs beat the Titans to reach Super Bowl LIV.

Shanahan was overly-aggressive late in that game when the Falcons had a chance to put the Patriots away and it cost his team dear. Reid has more than 200 regular season wins (207) but no Super Bowl ring. His only other big game appearance was in the 2004 season when the Philadelphia Eagles lost to New England. One of these coaches is going to get to lift the Super Bowl trophy and it will be a great story when it happens.

Both defenses of the Super Bowl-bound teams came to play on Championship Sunday. I thought the Chiefs controlled the line of scrimmage in some key situations against Tennessee and they swarmed to the football and tackled as a group, which is what has to happen when facing Derrick Henry. Tennessee’s powerful rusher – who excels as the game goes on – gained just seven yards on the ground after the break.

49ers run over Packers on way to Super Bowl

As for the Niners, they bullied Aaron Rodgers for the second time this season and Nick Bosa continues to shine in an outstanding rookie year. He is just one player on a star-studded line that will need to get after Mahomes in the Super Bowl. If defense does indeed win championships, each of these units is playing well enough to prove up to that task.

Let the football do the talking

The only black mark on the Chiefs’ victory over the Titans was the look-at-me actions – before and after the game – of defensive end Frank Clark and wide receiver Tyreek Hill. Both have a history of domestic violence and could turn the neutral fan off the Chiefs if they start acting up in Miami during Super Bowl week. It is just a distraction waiting to happen for Andy Reid’s team and worth monitoring. Clark called out Henry before the game and goaded him with an expletive-filled incident after the match at Arrowhead Stadium.

Clark on Henry: We sending him home early

Frank Clark didn’t shy away from addressing Derrick Henry yet again as the Kansas City Chiefs beat the Tennessee Titans on Sunday.

I reckon he will say something to get the headlines before Super Bowl Sunday. As for Hill, you would think he would prefer to keep a low profile and just let his football do the talking. He came very close to losing his job with the Chiefs this season and can count himself fortunate to be playing at all in this final game of the year. So why come running out of the tunnel, drop to all fours and simulate a dog peeing on the ground? Have some class, Tyreek. Keep an eye on these two over the next fortnight.

We are going to see a lot of red shirts in Miami as the 49ers and Chiefs faithful flock to South Florida. Both fan bases will be hungry for success. The Niners have gone 25 years since last winning it all and the Chiefs have doubled that total and gone 50 years since their lone Super Bowl success.

You could tell how much reaching this big game means for both fan bases – the noise as the final seconds ticked off the clock in both title games was absolutely deafening. After three straight Patriots Super Bowls, there is going to be a freshness to this final and that will be reflected in the passion and excitement of 49ers and Chiefs fans who make their way to Miami.