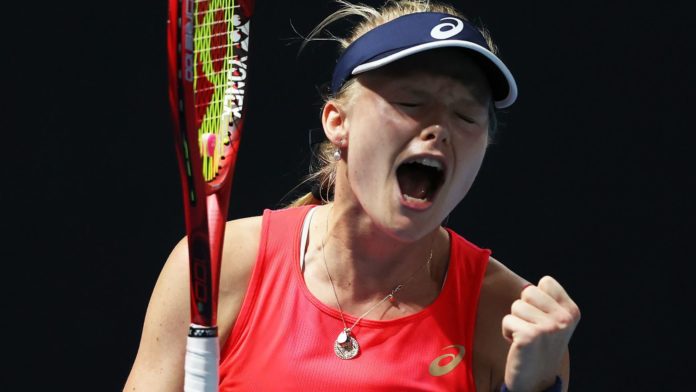 British No 3  Harriet Dart, who came through qualifying for the second straight year, records superb comeback win to set up meeting with Wimbledon champion Simona Halep

Qualifier Harriet Dart ensured there was some British joy at the Australian Open on Tuesday with a stunning 2-6 6-4 7-6 (10-6) victory against Misaki Doi.

Twelve months ago she failed to win a game against Maria Sharapova, and she must have been having flashbacks as she went from 2-0 up to 6-2 2-0 down against Doi.

But this time she stopped the rot, fighting back to win the second set. A topsy-turvy decider saw Dart lead by a break three times, and she seemed poised to clinch it when she led 6-5 40-15 only to miss forehands on both match points.

Her chance looked to have gone when Doi opened up a 5-1 lead in the deciding first-to-10-points tie-break but Dart won nine of the next 10 points to book a second-round date with Wimbledon champion Simona Halep.

Norrie, who also lost in the first round on his debut last year, looked in the ascendancy at two sets to one up and with Herbert feeling his right thigh.

But he played a poor game to drop serve at 5-5 in the fourth set and it was Herbert who claimed the win after three hours and 42 minutes.

Dart joins Dan Evans as the second British singles player to reach the second round in Melbourne with 30th seed Evans up against Japan’s Yoshihito Nishioka on Wednesday.

British No 2 Heather Watson is in first round action against Kristyna Pliskova – sister of world No 2 Karolina – overnight on Wednesday after her match was rescheduled.