Home Culture How the Jonas Brothers relax before their shows 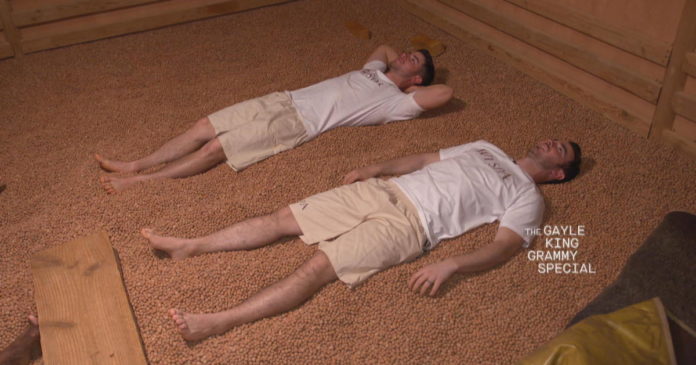 The Jonas Brothers, back together after more than five years, say they go to the spa “to center up and relax” before shows. Nick, Joe and Kevin took “CBS This morning” co-host Gayle King to Wi Spa in Los Angeles for “The Gayle King Grammy Special,” airing on CBS Thursday at 10 p.m. ET.

The interview location was Nick’s idea. “I think you’ll like it,” he said to King.

“That feels so good,” Kevin said as the four laid down in the 123-degree clay sauna.

“It does,” King agreed. “What does this do for you guys?”

“Being in any warm place … it helps warm up the voice a little bit,” Joe said.

“When you’re on the road, there tends to be a little bit more alcohol consumed than normal day life at home,” Nick said. “So it is kind of nice to get that out of your system and feel fresh before the show.”

A few hours after the spa, the brothers would be on stage.

“We’ll be in front of 20-something thousand people, and so having some time to center up and relax beforehand is pretty important,” Nick said.

“We’re the most happy to see ourselves back together,” Kevin said. “This year’s been about healing for us.”

More of King’s conversation with the Jonas Brothers and other big names in music will air on CBS in “The Gayle King Grammy Special” on Thursday at 10 p.m. ET. Plus, part of her interview with Blake Shelton and Gwen Stefani will air Wednesday on “CBS This Morning.”

The Grammys will air Sunday night at 8 p.m. ET on CBS.