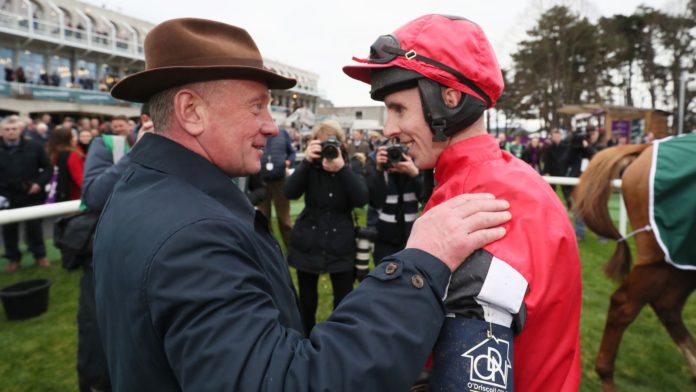 Nicky Richards expects to be double-handed in Doncaster’s Sky Bet Chase, with My Old Gold and Chidswell.

The Greystoke trainer has yet to get his name on the trophy for a race formerly run as the Great Yorkshire Chase, but his father Gordon won it three times – including twice in succession, in 1996 and 1997, with Addington Boy and General Command.

The mare My Old Gold scored over course and distance last time out, beating Cloth Cap, while Chidswell won the Grimthorpe Chase at the track last March.

“At the moment I’m intending to run them both, because the ground should be fine for the pair of them,” said Richards.

“My Old Gold came to the game a bit late – she was seven before she ran in a point-to-point, so she’s making up for lost time.

“Good to soft would be just about perfect for her, as it would for Chidswell.”

The latter is 11 but, like his stablemate, lightly-raced – especially early in his career.

Richards added: “He’s not had that much racing either for one of his age, and is in grand fettle now.

“He’d probably been on the go too long when we took him to the Perth Gold Cup in June, so we left him out at grass a bit longer than the others.

“He blew up first time – but he’ll come on for that and he’s got plenty in his favour, too.

“We’ll sort jockeys out later in the week.”