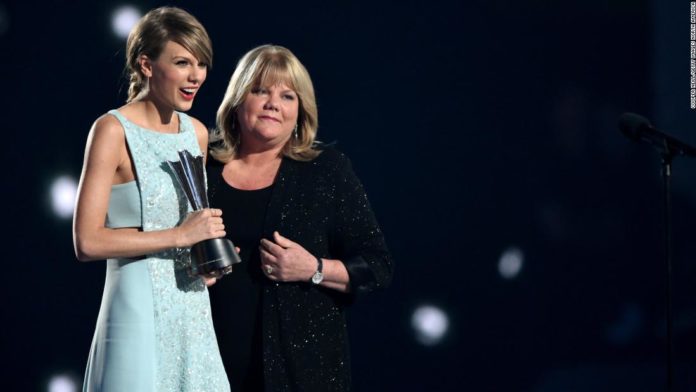 In a cover story with Variety released on Tuesday, the singer said that a brain tumor was discovered during her mother’s course of treatment.
“The symptoms of what a person goes through when they have a brain tumor is nothing like what we’ve ever been through with her cancer before,” Swift said. “So it’s just been a really hard time for us as a family.”
The superstar revealed Andrea Swift’s cancer diagnosis in an essay she wrote for Elle magazine last March.
“Both of my parents have had cancer, and my mom is now fighting her battle with it again,” the younger Swift wrote. “It’s taught me that there are real problems and then there’s everything else. My mom’s cancer is a real problem.”
In December, Swift gave some indication as to why there will be fewer stops for her “Lover” concert tour during an interview with Billboard.
“This is a year where I have to be there for my family — there’s a lot of question marks throughout the next year, so I wanted to make sure that I could go home,” she said.
Swift reiterated the need to be there for her mom.
“I mean, we don’t know what is going to happen. We don’t know what treatment we’re going to choose,” she said. “It just was the decision to make at the time, for right now, for what’s going on.”
She also talked about the close relationship she shares with her mother.
“Everyone loves their mom; everyone’s got an important mom,” Swift said. “But for me, she’s really the guiding force. Almost every decision I make, I talk to her about it first. So obviously it was a really big deal to ever speak about her illness.”