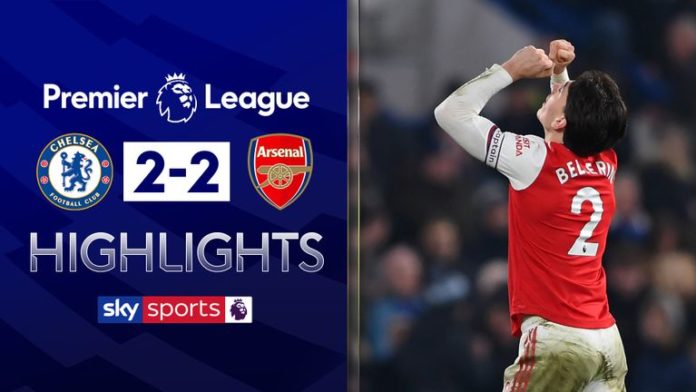 Mikel Arteta praised Arsenal’s never-say-die spirit after they twice fought back from behind to claim a dramatic 2-2 draw against Chelsea at Stamford Bridge despite having David Luiz sent off in the first half.

The Brazilian was shown a straight red card when he brought down Tammy Abraham following an under-hit backpass from Shkodran Mustafi, with Jorginho converting the resulting penalty.

But Gabriel Martinelli struck a breakaway equaliser midway through the second period, before Cesar Azpilicueta’s close-range finish was cancelled out by Hector Bellerin’s left-footed strike three minutes from time.

The full-back’s goal secured a draw which felt like a win for Arsenal, who only had two shots on goal to Chelsea’s 19 but showed impressive resilience, and Arteta was delighted by their response to the early setback.

“I am proud,” he said in his post-match press conference. “The spirit they showed, the character, the fight and the leadership was there.

“You have to really stand up. When someone makes a mistake and someone has to take a red card, it can happen in football.

“What cannot happen is that afterwards, we don’t stand up for him. Every single player did it with belief as well.

“I could sense at half-time that they believed they could get back in the game. I wasn’t expecting Hector to score with his left foot, obviously, but I’m very pleased.

“We are playing with a lot of young kids and what they have showed tonight is going to be a great experience for them: To keep believing that in football, if you give everything, anything can happen.”

‘I thought about subbing Martinelli!’

Arteta was also full of praise for the 18-year-old Martinelli, who scored for the second consecutive game having stepped in for the suspended Pierre-Emerick Aubameyang, saying he thought about substituting him – only to change his mind.

“To play in this stadium, in the way he has done, with 10 men, and play against [Cesar] Azpilicueta, who in my opinion is one of the best defenders in the Premier, you need courage to do that.

“I wanted to take him off a few times because he looked knackered and he was cramping, but next minute he is sprinting 60 yards again.

“It’s not just him. I think Laca [Alexandre Lacazette] is playing at a good level, even if he is not scoring, Nico [Nicolas Pepe] as well, and everybody that is coming in.

“They are fighting really hard in training to try to convince us to play more. When they question some things, I tell them to speak on the pitch and this is speaking on the pitch.”

Arteta also explained why he declined to make a defensive substitution after Luiz’s sending off, instead keeping Granit Xhaka at centre-back alongside Mustafi.

“I was thinking about that, but I didn’t want to send that message to the team,” he said.

“We decided to keep us as we were and give the players a chance. I wanted to see how they could respond to that.”