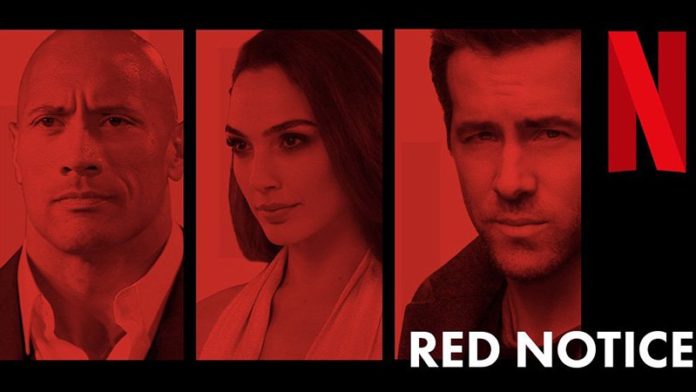 Dwayne Johnson (Black Adam) took to Instagram to reveal that filming has officially begun on Netflix’s forthcoming action-comedy film Red Notice which will feature the highly-anticipated team-up between A-list stars Johnson, Gal Gadot (Wonder Woman 1984) and Ryan Reynolds (Deadpool, Free Guy). This project will be Gadot and Reynolds’ second collaboration with Johnson, who have previously worked with each of them on Fast Five and Hobbs & Shaw, respectively.

Red Notice is described as a as a globe-trotting, action-comedy heist thriller designed as a three-hander between Johnson, Gadot, and Reynolds. In the film, Johnson plays an Interpol agent tasked with capturing the most wanted art thief in the world. “Red Notice” refers to the highest and most serious of Interpol notices (there are eight) and concerns the arrest of wanted criminals. Meanwhile, Gal Gadot is to portray role of the world’s greatest art thief with Ryan Reynolds playing the world’s greatest con-man.

The film will be written and directed by Rawson Marshall Thurber, who have worked with Johnson in Central Intelligence and Skyscraper. Last year, Netflix won the distributing rights to the film in a competitive bidding war after Universal Pictures reportedly didn’t committed with all of filmmakers’ deal.