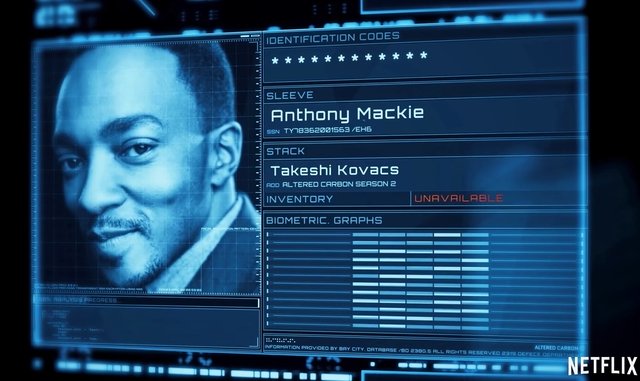 Netflix has announced the official premiere date for the upcoming second season of their cyberpunk series Altered Carbon, which will be led by MCU star Anthony Mackie. Based on author Richard K. Morgan’s sci-fi novel of the same name, the series is scheduled to return on February 27 after more than two years since the first season debuted in February 2018. The announcement also came with the release of a brand new teaser, which you can check out in the player below!

In Altered Carbon Season 2, Anthony Mackie (The Falcon and the Winter Soldier) would be taking over the role of Takeshi Kovacs from Joel Kinnaman. Kovacs is a former soldier who became a revolutionary, then a mercenary for hire. Aggressively independent, Kovacs swears allegiance to no man or woman except one: Quellcrist Falconer. His undying quest to reconnect with her spans multiple centuries, planets and sleeves.

It will also the feature returning cast members Renee Elise Goldsberry (One Life to Live) as Quellcrist Falconer, Chris Conner (American Crime Story) as Edgar Poe and Will Yun Lee, who was the original Takeshi Kovacs, who existed in his original body over 200 years before the start of the series and whose spirit has gone on through various bodies entitled sleeves with an alien technology known as a cortical stack.

Based on the classic science fiction novels by Richard K. Morgan, Altered Carbon is an intriguing story of murder, love, sex, and betrayal, set more than 300 years in the future. In season one — currently available to stream on Netflix — society has been transformed by new technology: consciousness can be digitized; human bodies are interchangeable; death is no longer permanent. Takeshi Kovacs is the lone surviving soldier in a group of elite interstellar warriors who were defeated in an uprising against the new world order. His mind was imprisoned, “on ice”, for centuries until Laurens Bancroft (James Purefoy), an impossibly wealthy, long-lived man, offers Kovacs the chance to live again. In exchange, Kovacs has to solve a murder… that of Bancroft himself.