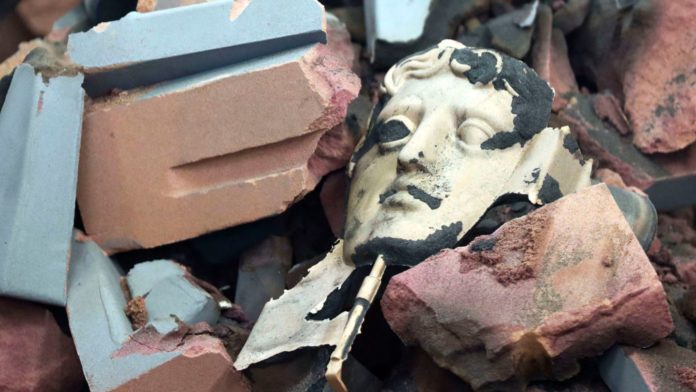 When BAFTA winners walk away with their trophies, you might imagine most are placed proudly on a mantelpiece, put on display in a cabinet, or designated as a quirky feature for a downstairs loo.

However, a craftsman who works on the famous bronze BAFTA masks has revealed that not all are looked after so lovingly.

Patrick Helly, who works as a technical adviser at the New Pro Foundries factory in west London, has revealed that some awards have been sent back for repair – including one which was used as a doorstop, and another which was thrown at the winner’s partner.

The trophies are handmade at the factory in a process that has remained largely unchanged for about 40 years.

In that time, Helly has seen a few returned in need of some TLC.

“In one instance, we were told that the BAFTA had been thrown at the spouse and the BAFTA was damaged, not the spouse,” he said.

Mr Helly, who has been involved in manufacturing the trophies since 1978, said it is “quite good fun when we get asked to repair BAFTAs from people who have won them in previous years”.

“People might use them as a doorstop and the door has whacked against it and bent it,” he said.

Mr Helly did not reveal any details about which winners’ awards had needed fixing, or when the repairs took place.

Could Dames Maggie Smith and Judi Dench, who have both won five awards, ever have used one for a doorstop? Or perhaps it was more recently; Olivia Colman and Rami Malek picked up the best actor and actress awards last year.

We’re pointing no fingers. And sadly, we might never know.

Preparations are currently under way for this year’s awards show, which takes place at the Royal Albert Hall, hosted by Graham Norton, on Sunday 2 February.

Batman spin-off Joker leads the way for this year’s ceremony, with 11 nominations, and is closely followed by Quentin Tarantino’s Once Upon A Time… In Hollywood and Martin Scorsese’s The Irishman, which each have 10.

The casting of the BAFTA trophies and seeing the winners holding them is “the high point” of the year for New Pro Foundries, Mr Helly said.

“To our guys, they love seeing people picking up the BAFTA and waving it around because that’s what they all do,” he said.

The BAFTA mask design, based on the tragicomic mask of Ancient Greek theatre, was created in 1955 by US sculptor Mitzi Cunliffe, who was commissioned to design the trophy.

The awards are made from bronze, which is cast inside a sand casing before being polished and placed into its stand.

The casting process takes around three hours, with a total of about 280 trophies made each year.