Home World Things have changed for Venezuela. But they’re not what Juan Guaido hoped... 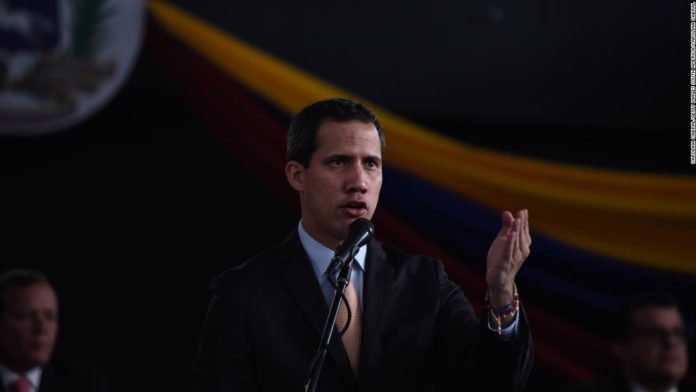 That’s the question dogging Juan Guaido as he embarks on another global tour, an uncomfortable mirror of the near-triumphant voyage he took last February in the weeks after declaring himself the rightful interim president of Venezuela.
Back then, he escaped a travel ban and slipped into Colombia to attend a rock concert hosted by British billionaire Richard Branson. He shook eager presidential hands both there and around South America before launching a daring bid to return to Venezuela, flummoxing his opponents by sneaking back into Caracas’ main airport in plain sight on a commercial jet.
He was the star in his own meteoric tale, bolstered by the Trump administration and Venezuela’s neighbors: that he was the only legitimate leader of his country, and that Nicolas Maduro was done.
As he makes another foreign trip this week, the star power and magnetism — and the hope — has mostly evaporated. Guaido met US Secretary of State Mike Pompeo at a counter-narcotics conference in Colombia on Monday, before heading off to Europe, where he may miss President Donald Trump if he gets as far as Davos in Switzerland.
Change is likely not coming in Guaido’s wake — and his air miles are more a bid to resuscitate himself on the international stage than a chance for foreign capitals to hyperventilate about his transitional presidency.
So what has changed, if Guaido brought none?
First was Trump. While the fuel for Guaido’s rise was the smoldering and inexorable collapse of Venezuela, the spark was a White House convinced that an easy win was possible. Sacked US national security adviser John Bolton, who told Maduro he should look into beachfront property for retirement, may himself be crafting his explosive memoirs overlooking some gentle sands. Trump’s officials still bang the drum of sanctions, but Venezuela is rarely on his lips now. Unless Trump thinks a revived campaign to oust Maduro may help his reelection chances — perhaps in Florida — it’s unlikely he’ll escalate anytime soon. And given how entrenched the Maduro government is, the US would need to consider using force.
Second, Guaido failed. His team was new to cutthroat politics, charmingly dazzled by their sudden overnight ascendance, and alternated between being startlingly adept and shockingly naive. The failed attempt to overthrow Maduro on April 30 was a decisive moment when Guaido and his emboldened supporters, including even soldiers in the streets of the capital in blue armbands, failed to turn the tide. Guaido failed at the one thing everyone knew he needed to break: the security forces and their hold on the guns, drugs, money and borders.
Which leads to the third change — in Maduro himself. He has been pragmatic, but also ruthless. A recent interview with The Washington Post saw him offer direct talks with the Trump administration and even business opportunities to American oil giants. Offering Trump business deals while the White House is busy instead pillorying you with sanctions borders on ridicule and is not something you do unless you are pretty relaxed.
Maduro has also turned nast(ier). Whereas a year ago, the security forces seemed at times reticent to resort to violence — and perhaps even feared greater popular anger if they drew Venezuelan blood — now, the gloves are off. An extensive torture campaign has been documented by human rights workers, intended to rub out any sense of disloyalty from the military. Cuban operatives stalk detention centers where systematic violence and rape is alleged. Civilian opponents have been executed by special police units, human rights workers and the UN say. The Maduro government has rejected these allegations.
Even Guaido’s fellow opposition legislators — together with journalists and bystanders — were physically attacked outside the National Assembly this month by Maduro loyalists. There’s always been thuggery, but the torture has become systematic and the targets on the street are broader now.
Maduro has also been smart enough to allow tiny reforms. The seat of power — Caracas — is strangely calm. A friend there tells me dollars are informally permitted to pay for goods, removing one grievance behind the protests and reducing the impact of hyperinflation on the local bolivar. If you have dollars you can eat, even if the city is even less secure. Wholesale decline has continued in rural areas, where barter is now common and food scarce. But if the capital is muddling through, Maduro’s grip on its levers of power can stay tight.
It is hard not to see the hand of Moscow in some of these choices. Tiny economic reforms and targeted brutality are straight from the Kremlin’s playbook. Russian state oil firm Rosneft is also accused of trading Venezuelan oil with India and China to get around sanctions. (Russia and its companies have denied any wrongdoing or involvement in deals alleged to break international law.) Again, while the White House’s attention span for revolution demands overnight results, Moscow sits in with its allies for the long haul.
Yet none of Guaido’s failure alters the underlying crisis at the heart of Venezuela: that its kleptocracy and mismanagement are still bleeding it dry, with hundreds of thousands still refugees around the region. But it marks yet another opposition leader’s rise and then deceleration.
Guaido may not be done yet. Maduro’s new penchant for strong-arm tactics could see his rival arrested. That could spark internal fury, or meaningful external action. Military defectors in exile may muster enough foreign support to affect some sort of change. The Trump administration may have a backup plan.
But the most startling observation — a year since Guaido stood before a crowd of thousands of supporters in Caracas and declared he was the legitimate president of the entire nation — is how smoothly Maduro has sailed out of the storm.