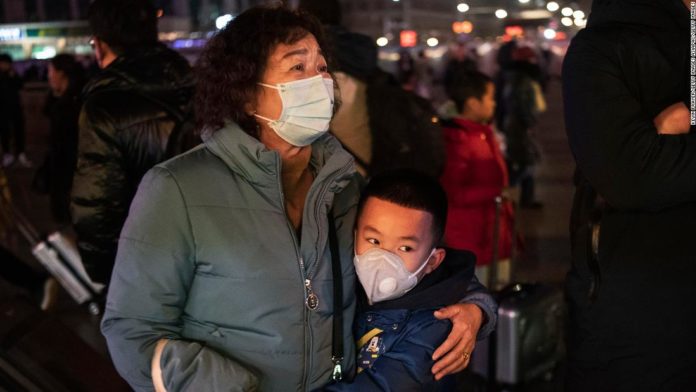 China’s Shanghai Composite (SHCOMP) was last up 0.4%, reversing earlier losses. The index had fallen more than 1% Wednesday morning.
Hong Kong’s benchmark Hang Seng Index (HSI) moved up 1.1% after recording its worst day in more than five months. South Korea’s Kospi (KOSPI) was up 1.2%, while Japan’s Nikkei 225 (N225) was 0.6% higher.
Wednesday’s gains marked a significant improvement over Tuesday’s “sea of red,” when stocks in the region were down across the board. That slump came as China confirmed that the new coronavirus can be transmitted between humans.
While Shanghai eventually recovered, its losses earlier in the day indicated that China is “far more vulnerable to the spread of coronavirus” than other parts of Asia, according to Jeffrey Halley, senior market analyst for Asia Pacific at Oanda.
Chinese airline stocks, which recorded steep losses earlier in the week, also recovered Wednesday. China Southern Airlines was up 1.3% in Hong Kong; its Shanghai-listed shares were up 0.2%.
Shares of Air China were positive in both Shanghai and Hong Kong, with the latter shares up about 1.6%. China Eastern Airlines was the biggest gainer of the three — its Hong Kong listed shares were last up 3.2%. Shares in Shanghai advanced 1.2%.
The country’s travel industry is preparing for the possibility that the pneumonia-causing virus could become even more widespread during a busy travel season. The virus — which has killed at least nine people and sickened hundreds — originated in the central Chinese city of Wuhan, but has spread throughout the region and reached as far as the United States.
Trip.com (TCOM), China’s biggest online travel agency, announced Tuesday that it would waive cancellation fees for trips to Wuhan. That stock, which is traded in New York, plummeted nearly 8% overnight.
Meanwhile, China says it is taking more steps to prevent the outbreak from spreading via aircraft. The Civil Aviation Administration of China, the country’s airline regulator, on Tuesday instructed Chinese carriers to offer passengers booked on Wuhan flights free cancellations if requested.
State media also cited China’s rail authorities as saying they are now offering passengers booked on Wuhan trains free cancellations.