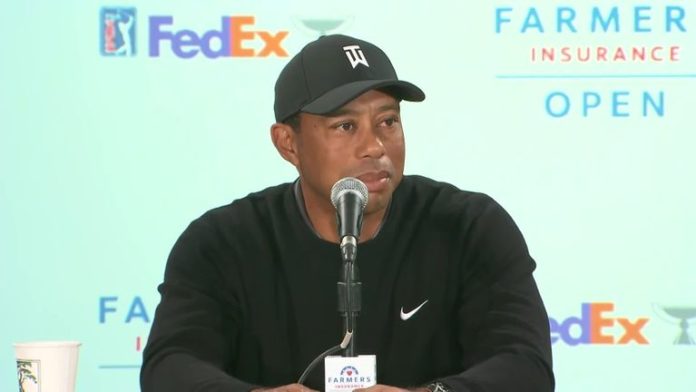 Tiger Woods is relishing the chance to return to a familiar hunting ground as he gets his 2020 schedule underway at the Farmers Insurance Open in California.

Woods makes his first appearance since winning all three matches as a player-captain in Team USA’s Presidents Cup victory at Royal Melbourne in December, having won the Zozo Championship in his previous PGA Tour start.

The world No 6 is a seven-time winner of the Torrey Pines event, where he also won the US Open in 2008, with Woods looking to build on that record as he challenges for a history-making 83rd PGA Tour title.

“I’ve always have enjoyed coming down here to Torrey Pines,” Woods said. “It’s been near and dear to my heart for a number of years and I’m looking forward to getting out there and playing.

“I feel like I ended the year [2019] on a good note, and I felt like my game really didn’t need a whole lot of dusting off. I didn’t touch a club until my birthday (December 30).

“That was the only day I touched a club since the Presidents Cup. Just wanted to get away from it, I was a little bit fried physically, mentally, emotionally and just wanted to have it all end.”

Woods plays alongside Collin Morikawa and Jon Rahm for the first two rounds, played across two courses, with Rory McIlroy and Justin Rose among the other names in a start-studded field.

The former world No 1 has been experimenting with new clubs in the off-season, although is still undecided as to whether they will be in the bag once the tournament gets underway on Thursday.

“I am putting some new woods in play this week,” Woods added. “I’m going to have to do some testing there and making sure they’re ready to go. If not, I’ll go back to my old faithful. As far as everything else is the same in the bag.”

The 15-time major champion also has the added incentive over the coming months to try and qualify for the Olympics, with Woods keen to get the chance to represent Team USA in Tokyo.

“I think, for the US guys, we’re going to have to play well (to qualify for the Olympics),” Woods added. There are a lot of us that are in the top 15.

“I think I just, may have just fallen back into it, in the fourth slot but there’s so much golf to be played, so many big events, major championships, The Players, World Golf Championships.

“There’s a lot of golf to be played (before the Olympics) and there will be some pretty good fluctuating over the next six months.”

Watch the Farmers Insurance Open throughout the week live on Sky Sports. Live coverage begins with Featured Groups on Thursday from 5pm on Sky Sports Golf.