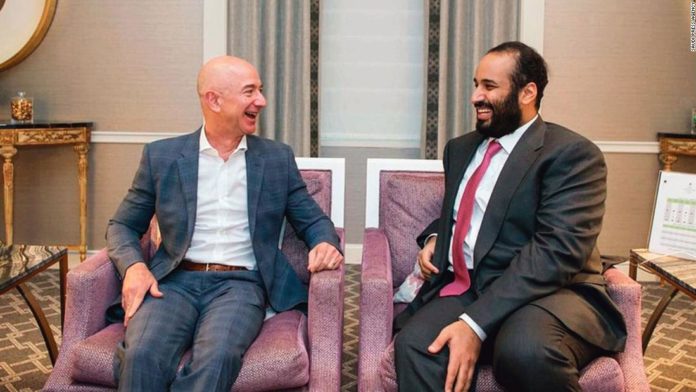 Saudi Arabia denied on Tuesday that it was responsible for the attack after a media report implicated the crown prince.
The Saudi embassy in Washington said in a statement posted online that “recent media reports that suggest the Kingdom is behind a hacking of Mr. Jeff Bezos’ phone are absurd.”
“We call for an investigation on these claims so that we can have all the facts out,” the embassy added.
The forensic digital analysis concluded that the phone was compromised after Bezos received a malicious video file from a phone number used by bin Salman, according to the source who spoke to CNN.
The Guardian newspaper, citing anonymous sources, was first to report this on Tuesday.
The newspaper said that “large amounts of data” were extracted from Bezos’ phone within hours.
Amazon (AMZN) declined to comment when contacted by CNN Business.
The revelation casts a new shadow over the future king, whose efforts to overhaul Saudi Arabia’s economy and attract foreign investment have been frustrated by the Saudi government’s role in the murder of journalist Jamal Khashoggi.
At the time of his death in October 2018, Khashoggi was working as a columnist for the Washington Post, a newspaper owned by Bezos. Khashoggi was a dissident who had been critical of the Saudi government.
Bezos suggested in an online post published in February 2019 that he had become an enemy of Saudi Arabia due to the Washington Post’s coverage of the murder.
The CEO also suggested that the attack was part of a scheme that allowed the National Enquirer, a US tabloid, to gain access to private texts he exchanged with a woman named Lauren Sanchez, with whom he was having an extramarital affair.
A spokesman for the publisher of the National Enquirer previously said, “American Media does not have, nor have we ever had, any editorial or financial ties to Saudi Arabia.”
An attorney for American Media CEO David Pecker, Elkan Abramowitz, said in February that the source for the tabloid’s story was “not Saudi Arabia.”
Gavin de Becker, a security consultant working for Bezos, has also suggested that Saudi Arabia played a role in the attack on the CEO’s phone. “Our investigators and several experts concluded with high confidence that the Saudis had access to Bezos’ phone, and gained private information,” de Becker wrote in an opinion piece published by the Daily Beast in March 2019.
Saudi Arabia sentenced five people to death for the murder of Khashoggi in December but cleared a former top adviser to bin Salman, an outcome that was described by UN Special Rapporteur Agnes Callamard as “anything but justice.” The United Nations expert previously found “sufficient credible evidence” that called for the Saudi crown prince to be investigated.
The Washington Post reported Tuesday that the United Nations is preparing to publicize the results of a forensic investigation that confirms the Guardian report and concludes that Bezos’ phone was infected after he received a message from an account belonging to bin Salman. The Office of the United Nations High Commissioner for Human Rights declined to comment.
Callamard, however, suggested on Twitter that she was preparing to address the allegations reported in the Guardian. She said that more information would be released at 9:00 am ET on Wednesday.