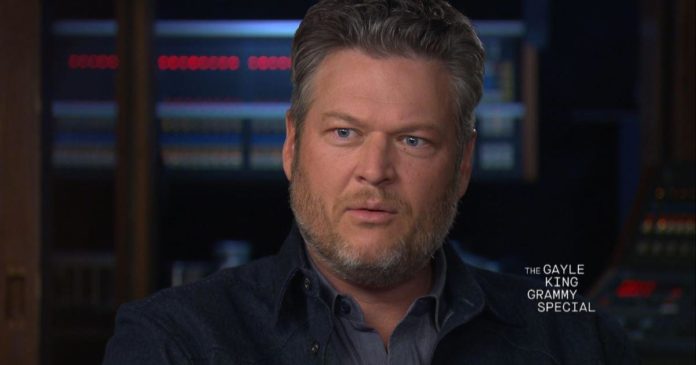 Before Blake Shelton’s song “God’s Country” earned him a Grammy nomination in November, the country music star couldn’t imagine any more hit songs in his future.

“I just kinda felt like, ‘Well, that window closed. That time came and went,’ you know?” he told “CBS This Morning” co-host Gayle King for the “Gayle King Grammy Special,” airing on CBS Thursday at 10 p.m. ET.

“Was Blake Shelton having a pity party for himself?” King asked.

Asked why he was talking like he was on the “down side” of his career, Shelton said, “I think I just feel like one of these days people are going to wake up and go, ‘That guy’s been doing this for 20 years. That’s enough.'”

But just a year ago, Shelton was working on his ranch in Oklahoma when his producer sent a demo of a new song called “God’s Country.”

“I just completely lost myself in this moment, listening to this song, And the second time I played it, my heart started pounding, and what it did was made me go, ‘Dammit, I want to do this,'” he said.

More of King’s conversation with the Jonas Brothers and other big names in music will air on CBS in “The Gayle King Grammy Special” on Thursday at 10 p.m. ET. Plus, part of her interview with Blake Shelton and Gwen Stefani will air Wednesday on “CBS This Morning.”

The Grammys will air Sunday night at 8 p.m. ET on CBS.