Home Lifestyle 2020 is the Year of the Menicure 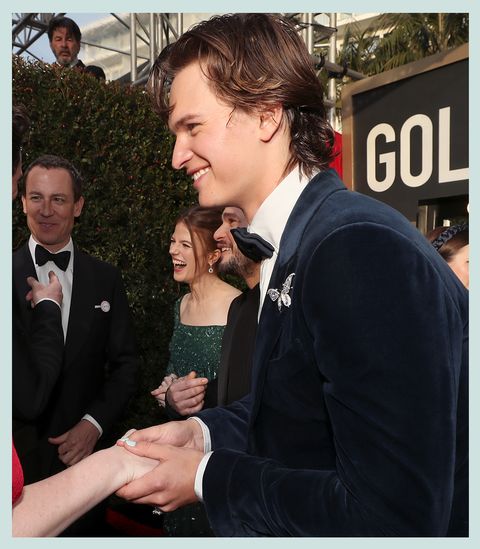 I was at a party recently when I was introduced to a handsome guy wearing a grey wool suit, a very expensive-looking sweater, and designer sneakers. His fit was stylish but nothing over the top. But as I shook his hand, I noticed something: he was also wearing black nail polish.

Full disclosure: I was also wearing black nail polish, something I have been doing more often than not for the last few months. He noticed mine, I noticed his, and an unspoken knowing passed between us. We were both part of an ever-growing selection of men who just want a little something extra on our hands.

Ansel Elgort at the 2020 Golden Globes.

In the weeks since I met that guy, I’ve noticed it more and more. A guy sitting behind me at the movies the other day had on neon orange; a dude across from me on the subway displayed classic black but only on one hand; a store clerk who rang me up was rocking linear nail art.

So when Ansel Elgort showed up wearing white nail polish with his velvet tuxedo at the Golden Globes, I didn’t bat an eye. He’s been part of the Menicure Movement for a while, along with other stylish male celebrities like Harry Styles, A$AP Rocky, Bad Bunny (who favors gel manicures thankyouverymuch), and Pete Davidson (remember his fire engine red nails?). Like David Bowie and Kurt Cobain before them, these dudes appreciate a good colored ‘cure, but whether these famous guys are driving the trend or just following it is unclear. What is certain is that men everywhere are more and more comfortable wearing nail polish. So comfortable, in fact, that nail polish brand Essie is launching a line of quick-dry polishes targeted to all genders, and New York City-based nail salon Sundays Studio now promotes “menicure mondays.” 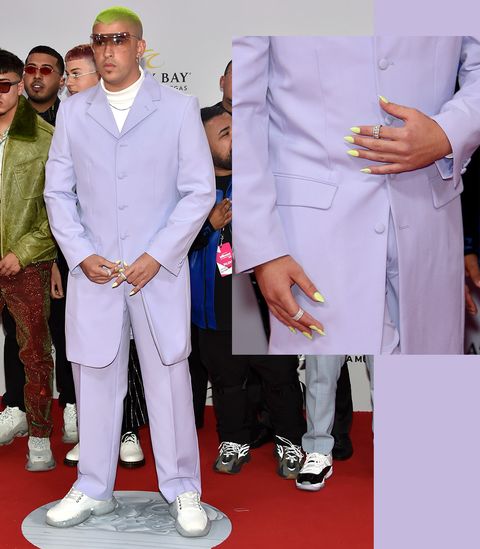 I did my own nail polishing in college, in the midst of a heavy emo phase, but when I started to wear colors again as a real human adult, it took some getting used to. See, I started to do it because it was the only thing I ever found that kept me from biting my nails. And at first, when people would point out or comment on my polish, my knee-jerk reaction was “it’s to keep me from biting my nails.” After a while, I wondered why I was reacting that way and why I felt the need to justify my decision with some stupid excuse. I realized I just like the way it looks, and I shouldn’t pretend otherwise. The comments haven’t decreased, but now my response is “thank you.”

But I’m also a quasi-gothy fashion dude living a big city—nail polish isn’t such a big jump when it comes to my look. Well, what about the rest of us? That’s exactly the question I had to confront when Esquire editor-in-chief Michael Sebastian asked me whether any guy could pull of nail polish, not just guys that look like me. I thought back to the suited guy from the party and to Elgort’s evening look, and here’s what I discovered: The answer is absolutely yes. 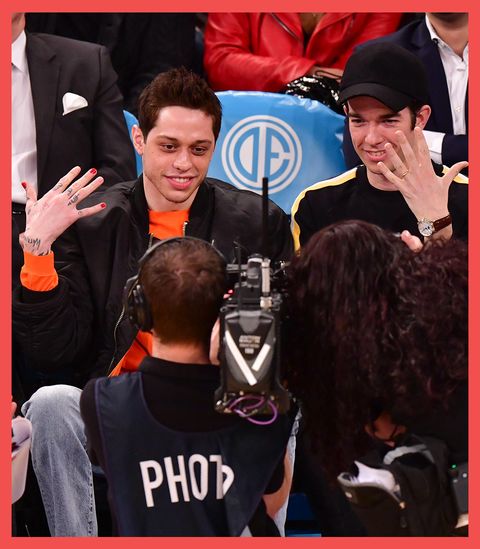 The key is to give zero fucks. Own that fact that by painting your nails, you’re automatically putting yourself in a higher echelon of style that’s open to anyone who takes the leap. But the other important thing is color choice. Pick a dark, neutral color that would go with most of the clothes you wear. Navy, grey, black…you know, classic suit colors. They won’t clash with most clothes and are subtle enough that some people may not even notice at first. Harry Styles’ blue/pink combos and Bad Bunny’s neon yellow are advanced swerves, but nothing’s stopping you there either—you just have to be ready for a few more people to notice.

Because people will. For better or worse, we’re living in a time when the gender lines and the rules of style are blurring rapidly, but not as rapidly as some might lead you to believe. There are still people out there whose eyes will widen slightly when they shake your well-polished hand. Fuck them. It’s a menicure world and they’re just living in it.