Home Culture Monty Python: The surreal geniuses known as The Beatles of comedy 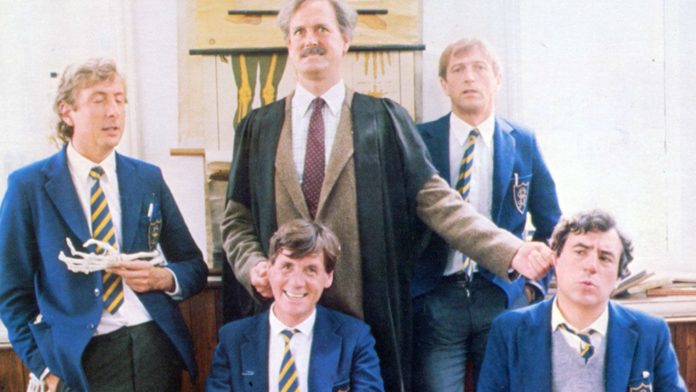 Terry Jones, who has died at the age of 77, was perhaps best known for his role as Brian’s mother in Monty Python’s Life Of Brian, delivering the most famous line in the 1979 comedy which was, at the time, hugely controversial due to its themes of religious satire.

Telling the story of mistaken identity surrounding a hapless man born on the same day and in the stable next door to Jesus Christ, Jones appeared as several characters and also directed the film.

As one of the founders of the surreal troupe, Jones is cemented in British entertainment history, with Monty Python’s influence on comedy often compared to The Beatles’ influence on music.

It started in 1969, when Jones sat down at a tandoori restaurant in north London alongside Michael Palin, Graham Chapman, John Cleese, Eric Idle and US animator Terry Gilliam.

Having met at university – Jones and Palin at Oxford; Cleese, Chapman and Idle were members of the famous Cambridge Footlights drama group – they wanted to work together on a new show that would push boundaries and not conform to the norms of television sketch comedy at the time. Gilliam joined as an animator, but went on to become a full member of the group.

Monty Python’s Flying Circus changed the tone of British comedy when it launched later that year, and went on to inspire dozens of performers who grew up watching it.

Making its debut late on a Sunday night on BBC One on 5 October 1969, just before the weather bulletin, the irreverent sketch show aired until 1974, earning BAFTA awards and even leading to a German spin-off thanks to its unique, stream-of-consciousness style.

“And now for something completely different” was their catchphrase, and they certainly lived up to it.

Cult status led to mainstream success, with sketches such as Dead Parrot, Ministry Of Silly Walks, The Lumberjack Song, Spam and The Spanish Inquisition still much loved today. Always Look On The Bright Side Of Life, from Life Of Brian, is a British singalong favourite, often requested at funerals.

In Flying Circus, Jones often appeared in drag, sometimes as a “haggard housewife,” or nude, while his other characters included Arthur “Two Sheds” Jackson, Cardinal Biggles of the Spanish Inquisition and Mr Creosote, the monstrously obese restaurant patron.

The group moved into film with Monty Python And The Holy Grail in 1975, based on the legend of King Arthur, with Jones making his directorial debut alongside Gilliam.

Life Of Brian, when it followed, was attacked as blasphemous, but is now a consistent top-five charter in polls of the funniest films of all time.

Jones also went on to direct The Meaning Of Life (1983), the Pythons’ last film together, which returned to sketches, loosely linked to follow the ages of man – and featured the very memorable song, Every Sperm Is Sacred.

At the time of its release, the Pythons said their aim was to offend “absolutely everyone”.

After their split in 1983, each member had various successes with projects in film, TV and on stage, often continuing to work with one another.

These works included A Fish Called Wanda in 1988, starring Cleese and Palin and written by Cleese. Cleese also created Fawlty Towers, the show about the infamous irritable hotel manager Basil Fawlty that is widely considered as one of the greatest British sitcoms of all time.

Gilliam established himself as a screenwriter and director, helming films including 12 Monkeys, Fear And Loathing In Las Vegas, The Imaginarium Of Doctor Parnassus and The Man Who Killed Don Quixote.

Idle, who performed many of the Pythons’ songs, went on to host Saturday Night Live in the US several times and later created the award-winning comedy musical Spamalot, adapted from The Holy Grail.

Chapman, who died of cancer in 1989, produced the pirate film Yellowbeard and wrote and starred in The Odd Job, alongside David Jason.

In 2014, the then five remaining members of Monty Python delighted fans when they reunited to perform together for the first time in decades.

The show, which featured an extended cast of dancers, a full orchestra and special effects, bowed out with a fitting Monty Python ending, the crowd singing along to Always Look On The Bright Side of Life – the perfect way to say goodbye.