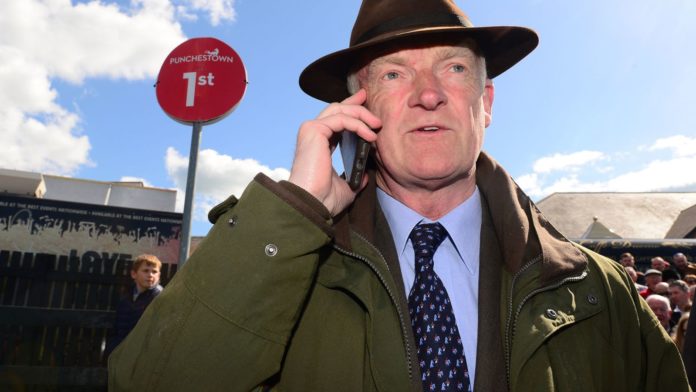 Willie Mullins will launch a six-pronged assault in a bid to win his eighth Goffs Thyestes Chase at Gowran Park.

This year’s squad is headed by top-weight Acapella Bourgeois, who is the chosen mount of stable jockey Paul Townend on Thursday – after filling the runner-up spot behind his Cheltenham Gold Cup-winning stablemate Al Boum Photo at Tramore on New Year’s Day.

Mullins’ assistant David Casey – who won the Thyestes Chase three times as a jockey aboard This Is Serious, Hedgehunter and On His Own – said: “Obviously Acapella ran a very good race behind Al Boum, and we hope he’s improved again from that.

“Touch wood, he stays and jumps and he seems in good form – so hopefully he’ll run a big race.

“He has to carry top weight, but he has plenty of class.”

Robbie Power takes the ride on ante-post favourite Chef Des Obeaux, who has made two starts for Mullins since leaving Nicky Henderson’s yard – finishing fourth in the Drinmore at Fairyhouse and fifth in the Paddy Power Chase at Leopardstown.

Casey added: “Chef Des Obeaux improved a lot from Fairyhouse to Leopardstown, and I think the step up in trip helped him.

“I also think he’ll be better suited by going back right-handed, because he does jump a bit to his right. He has to have his chance.

“Pont Aven unseated early in the Paddy Power Chase at Christmas – but he’s been fine since and he gets in with a nice light weight (10st 3lb), so he could run well.

“We’re hoping Livelovelaugh will improve for his run in the Paddy Power; Class Conti would probably prefer better ground but will stay every yard of the trip, and Total Recall is back to a mark only 2lb higher than when he won the Ladbrokes Trophy in Newbury (in 2017).”

A maximum field of 18 runners, plus three reserves, have been declared for the 100,000 euro handicap.

Gordon Elliott also has a strong hand – with Borice and Roaring Bull part of a seven-strong team, including second reserve Out Sam.

The main supporting race is the Grade Two John Mulhern Galmoy Hurdle, which throws up an intriguing clash between the two brilliant mares Apple’s Jade and Benie Des Dieux.

Elliott’s Apple’s Jade bounced back to form when claiming her 11th Grade One victory at Leopardstown last month, while the Mullins-trained Benie Des Dieux makes her first competitive appearance since landing the French Champion Hurdle at Auteuil last June.

Casey said: “It’s a tough race – but Benie is in great form, and we’re looking forward to running her.

“Penhill is improving with every run this season, and Killultagh Vic ran a good race to finish third in this race last year.”

Elliott has a second string to his bow in Death Duty, who returns from a mammoth absence of 758 days.