Home Culture Weinstein injected himself to get erection before raping woman, trial hears 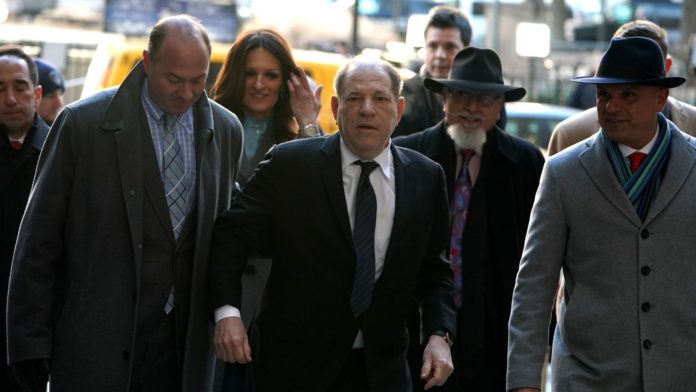 Harvey Weinstein used an injection to get an erection before raping a woman, a court has heard on the opening day of his trial in New York.

The former movie mogul also screamed at the alleged rape victim that she “owed” him sex and pushed his way into the home of another woman before assaulting her, a jury was told.

“He was not just a titan in Hollywood. He was a rapist,” prosecutor Meghan Hast said in her opening statement on Wednesday.

“It is for his complete lack of empathy that he must be held accountable.”

Weinstein, 67, is standing trial accused of raping a woman in a hotel room in 2013 and sexually assaulting another woman in 2006.

He has pleaded not guilty to five charges related to the two women and insists any sexual activity was consensual. If convicted, he could face life in prison.

One of the alleged victims, former production assistant Mimi Haleyi, has claimed publicly that Weinstein forced oral sex on her in his Manhattan home in 2006.

The other accuser in the case, who has not been identified, alleges that she raped by Weinstein in a Manhattan hotel in 2013.

On Wednesday, prosecutors told the jury that the alleged rape victim found a needle in the hotel room bathroom after being attacked and realised Weinstein had injected himself to get an erection.

On another occasion, after the woman told Weinstein she had a new boyfriend, he allegedly dragged her into a bedroom while “screaming at her that he owed her one more time,” Ms Hast said.

“He ripped her jeans off so forcefully that it left scratch marks,” the prosecutor added.

It was claimed that Weinstein later told the alleged victim: “I just want to apologise for what happened earlier. I just find you so attractive, I couldn’t resist you.”

Prosecutors say that Weinstein raped another woman, Sopranos actress Annabella Sciorra, in the 1990s but that allegation is too old to be charged as a separate crime.

Ms Hast claimed Weinstein attacked Sciorra after giving her a ride home to her Manhattan apartment and forcing his way inside.

“She told him to get out. She told him no. But Harvey Weinstein was undeterred,” Ms Hast said.

Prosecutors are expected to call up to three other women, who are not mentioned in the charges, to give evidence in support of their case.

Ms Hast said: “They will each describe their fear, their shame and their humiliation – the struggle each went through to push their trauma down and show a brave face to the world.”

During the prosecution’s opening statements, Weinstein sat quietly at the defence table, occasionally sipping water from a plastic cup or writing on a legal pad.

Around 100 people were packed into the courtroom for the opening of the trial, which has been described as the biggest of the #MeToo era.

Weinstein entered the courthouse in New York City on Wednesday without a walking frame, which he has used at previous appearances.

Asked by reporters on his way into court whether he thinks he will get a fair trial, Weinstein replied: “Yes.”

When asked why he believed that, he added: “I have good lawyers.”

After opening statements, prosecutors are expected to call a former member of the board of directors at Weinstein’s old movie studio to give evidence about how the company handled allegations against him.

Since 2017, more than 80 women, including several famous actresses, have accused Weinstein of sexual misconduct dating back decades – although his New York trial involves only two allegations.

Weinstein has denied the claims, saying any sexual encounters he had were consensual.

But judge James Burke told potential jurors at a previous court hearing: “This trial is not a referendum on the #MeToo movement.

“You must decide this case on the evidence.”

It is expected Weinstein’s trial could take more than a month.

His lawyers applied to have the court case moved out of New York City after claiming it had turned into a “media and entertainment circus”, but the request was rejected by a judge.

Once the New York trial is over, Weinstein faces additional rape and sexual assault charges in Los Angeles which were filed earlier this month.