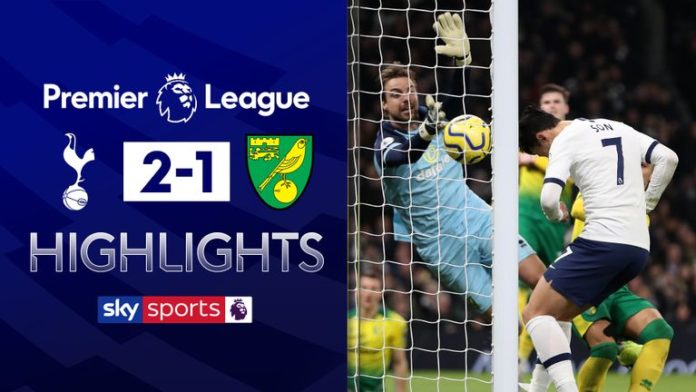 Heung-Min Son’s late header helped below-par Tottenham pick up their first league victory of 2020 with a 2-1 defeat of Norwich – but Jose Mourinho will know there is plenty of work to do if his side are to further close the six-point gap on the top four.

Dele Alli tucked in Tottenham’s first Premier League goal of the year from Serge Aurier’s low cross on 38 minutes after both sides had spurned good chances in the early exchanges but the hosts failed to kick-on.

Teemu Pukki (70) made bottom-of-the-league Norwich’s second-half dominance count, squeezing his penalty past Hugo Lloris – who had made a surprise return from injury to start – but Son’s header (79) from Alli’s deflected shot ended the visitors’ hopes of a turnaround.

The result moves Spurs to within two wins of fourth-placed Chelsea, while Norwich have a six-point gap of their own to overcome if they are to escape relegation.

How Spurs grabbed their first Premier League win of 2020…

Tottenham had failed to find the net in their past three Premier League games but were immediately on the front foot, with Erik Lamela following up an early free-kick attempt by drawing a sharp save from Tim Krul with a volley on 10 minutes.

However, Norwich showed their own attacking intent on the quarter-hour mark, when Todd Cantwell capped an impressive spell of possession with a neat pass through to Pukki from the edge of the area but the Finn was surprisingly wasteful, snatching his shot wide.

Son then blazed miles over the bar as Spurs began to become frustrated at failing to make the breakthrough on 23 minutes before Cantwell responded with a far closer drive of his own at the other end, which just flew past Lloris’ woodwork.

Son then blew the best opening of the game, lashing into the side-netting after Lucas Moura’s smart reverse pass and Pukki fired wide again as the teams continued to exchange chances until Alli finally broke the deadlock.

Aurier had looked dangerous all evening down the right flank and the England man was perfectly placed to clip his low cross under Krul to put Spurs ahead.

With the goal returned Spurs’ confidence; Lamela pulled out a rabona in search of Lucas and Alli attempted a back-heel shot. But Lukas Rupp toe-poked wide just before the break and Norwich came out fighting in the second half.

Cantwell left his foot in on Lamela – and after a lengthy VAR review received only a yellow card – before the Norwich attacker had handball shouts against Toby Alderweireld in the box waved away and Pukki sent another effort off target.

With Tottenham retreating into their own half, Cantwell was soon involved again as his collision with Winks forced the Spurs midfielder off with an ankle problem.

Norwich – who had dominated possession and territory since the interval – then deservedly pulled level from the penalty spot, with Pukki firing low past fit-again Lloris, after a long VAR check confirmed Ryan Sessegnon’s foul on Max Aarons.

They weren’t level for long, though – Spurs pushed forwards and Lo Celso’s clever pass through the Norwich defence put Alli through and when his blocked shot looped up to Son at the back post, the South Korean had a simple finish to restore the hosts’ lead.

Sub Christian Eriksen and Son on the counter-attack both blew chances to extend Spurs’ advantage but Mourinho’s men held on for a much-needed three points. They’ll need to be far better in the future, though, if they want to reach those Champions League qualifying spots.

Tottenham travel to Southampton in the FA Cup fourth round on Saturday before a big Sky Live clash with Manchester City on Sunday February 2, while Norwich head to Burnley in the cup on Saturday ahead of a journey to Newcastle on Saturday February 1.