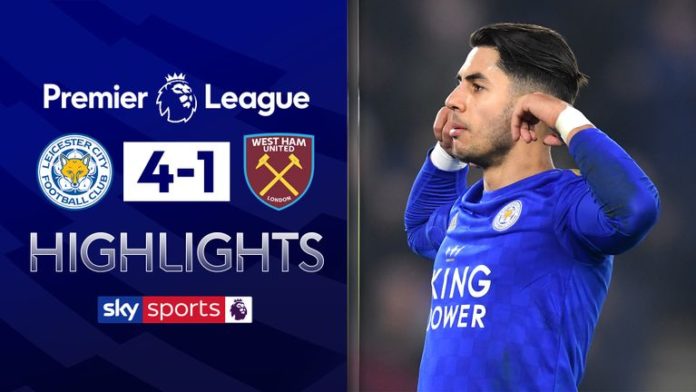 Leicester returned to winning ways in emphatic fashion, boosting their top-four hopes with a 4-1 victory against West Ham at the King Power Stadium.

Brendan Rodgers’ side came into the game on the back of successive defeats in the Premier League, but there was no sign of a lack of confidence as the hosts roared into a two-goal lead in the first half, despite losing Jamie Vardy and Nampalys Mendy to injury.

West Ham showed signs of life in the second half and they were handed a lifeline when Mark Noble scored from the penalty spot after substitute Wilfred Ndidi brought down Sebastien Haller just inside the penalty area.

The Hammers severely tested Leicester’s resolve as they searched for an equaliser, but Rodgers’ men held firm and their class shone through in the end as Ayoze Perez’s double in the final 10 minutes ended the challenge of David Moyes’ side.

Victory sees Leicester, who moved eight points clear of fourth-placed Chelsea, consolidate third place in the league, while West Ham stay 17th but level on points with Bournemouth and Watford in 18th and 19th respectively.

Leicester are in FA Cup action on Saturday when they travel to Brentford in the fourth round; Kick-off 12.45pm. They then face Aston Villa in the Carabao Cup semi-final second leg on January 28 (kick-off 7.45pm), live on Sky Sports Football, before facing Chelsea in the Premier League on February 1; Kick-off 12.30pm.