Bzzzzzz. There’s nothing peskier than mosquitos buzzing around, especially when they decide to pepper your skin with itchy welts. Except, of course, when the winged insects happen to be carrying a potentially deadly virus like Zika or dengue fever.

In recent years, mosquito-borne illnesses have been on the rise — and they pose an increasing threat to public health. In 2018, an outbreak of West Nile virus in Europe led to over 1,600 cases and more than 120 deaths. The virus, just one of many mosquito-borne infections, can cause symptoms from mild fever to life-threatening neurological issues.

But researchers from the University of Leeds in the U.K. have come up with a somewhat unexpected solution for protecting against the diseases these bloodsuckers carry: skin cream. In a paper published today in Science Translational Medicine, the scientists say that a widely used topical medication used to treat warts and skin cancer could also provide protection from a variety of mosquito-borne viruses.

“Mosquitos are expanding their range across the world as the planet gets hotter due to the climate emergency, so the health impact of mosquito-borne diseases is likely to increase in the future,” said researcher Clive McKimmie, the paper’s lead author, in a prepared statement. “If this strategy can be developed into a treatment option, we might be able to use it to tackle a wide range of new, emerging diseases.”

There are a variety of viruses that can be transmitted through the bite of an infected mosquito. Among these are the dengue virus, which can cause severe fever; Zika, a virus that can give rise to birth defects after infecting pregnant women; and the chikungunya virus, which prompts arthritis in the joints. Right now, there are few vaccines and no antiviral medications to treat these diseases.

When a mosquito punctures the skin in search of a meal, it triggers a defense mechanism that prompts our tissue to repair itself. But because this immune response doesn’t guard against viral infections, it enables mosquito-borne viruses to replicate quickly across the skin — and then spread throughout the rest of the body. The study authors explain that most of the virus in the bloodstream 24 hours after a mosquito’s nip mostly comes from this rapid proliferation through the skin.

But applying a compound known as imiquimod to bites activated the body’s immune and inflammatory pathways to attack the disease before it spreads, the researchers found. The cream prompted a type of immune cell, known as a macrophage, to combat viruses before they could proliferate and cause disease.

In the study, the researchers looked at several different mosquito-borne viruses in both mice and humans. They took skin samples from 16 volunteers and infected them with Zika and chikungunya before applying the skin cream to half of each sample, leaving the other half untreated.

For the chikungunya virus, the skin that didn’t get the treatment harbored the virus at 600 times the amount of the tissue that received the skin cream. With Zika, the untreated tissue contained 60 times more of the virus. In both experiments, the tissue treated with the skin cream didn’t release any of the infectious virus, meaning that it wouldn’t have spread and caused disease in humans. 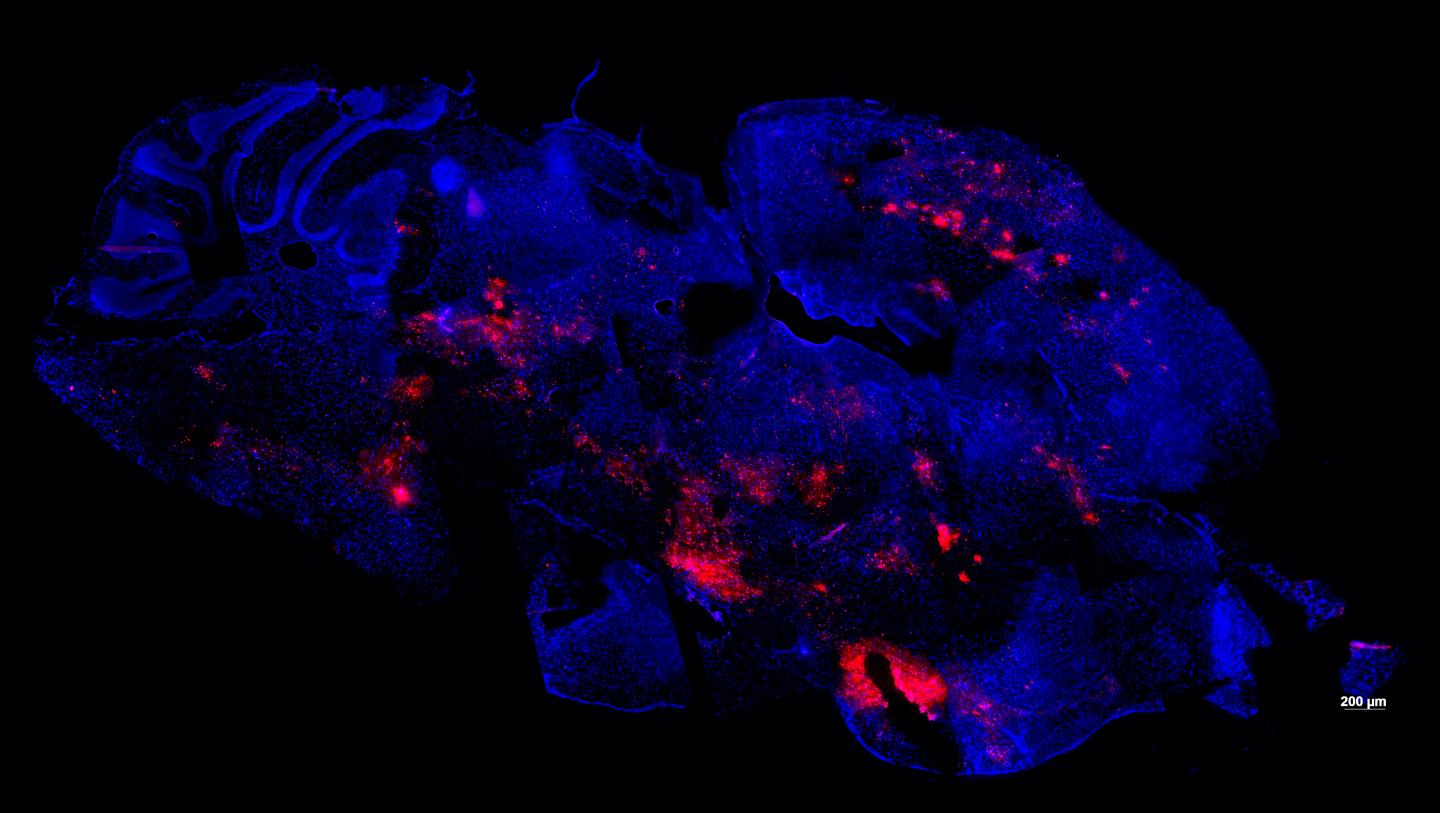 A mouse brain infected with the Semliki Forest virus, without receiving the skin cream treatment. (Credit: University of Leeds)

Other viruses, including the Semliki Forest virus, were tested on mice to see whether the skin cream would prevent disease in a living creature. After being bitten by infected mosquitos, half of the rodents received the topical cream. Two weeks later, the outcome for those that didn’t get the skin cream was bleak — none survived. Conversely, 65 percent of the animals that did get the treatment lived. But while these early results are promising, co-author Kave Shams, a dermatology consultant from the School of Medicine at the University of Leeds, cautioned consumers against using the cream on their own mosquito bites, in a press release. He says more research is needed first. The scientists are now seeking collaborators to begin testing the cream’s effectiveness at reducing viral infections in humans.

“We are hopeful that one day this discovery could help a vast number of people to avoid disease,” he adds. “If we can repurpose this cream into an antiviral treatment option, it could be a useful addition to mosquito repellant as a way of avoiding infection.”