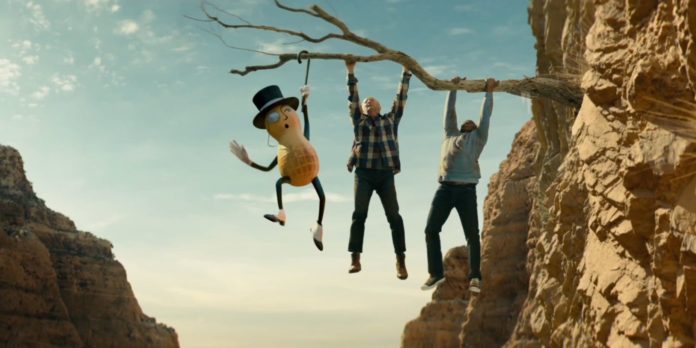 Good Wednesday to you. A peanut brand killed off its mascot by driving him off a cliff and blowing him up. This morning, the Planters Peanuts account announced on Twitter that Mr. Peanut, the 104-year-old mascot of the brand, had died giving his life for others. If that super dark sentence alone isn’t enough of a reason for you to remove your monocle, just wait for the rundown of this Planters commercial for Super Bowl LIV, because it’s a real trip.

Mr. Peanut, alongside Matt Walsh and Wesley Snipes, embarks upon a road trip. Good. Great. The trio is singing “I Just Died in Your Arms Tonight” when suddenly, they swerve their giant peanut car to avoid an armadillo. Are you still with me? The peanut car flies off a cliff, but the trio grabs onto a branch for safety. Unable to hold them all, Mr. Peanut gives a knowing look, nods his head, and lets go, plummeting to his death. When he lands, he’s met with a giant explosion, just like Marissa Cooper in the Season Three finale of The O.C.

At this point, someone has to answer for these sins. I’m not talking so much about blowing Mr. Peanut up, but more that someone in some room somewhere was like, “Hey, Carl. You know how Planters has been represented by a peanut in a top hat for *checks watch* 104 years? What if we just slit his damn throat for the Super Bowl?” And then everyone was like, “Yes. This is our fight song.” Chaotic energy reigns in 2020.

Last year’s crop of commercials already toed the line of absurdity. I mean, for God’s sake, they made Sarah Jessica Parker drink Stella Artois. Michael C. Hall performed a live-action Skittles musical. Zoe Kravitz did ASMR on a Michelob Ultra bottle, and I still felt nothing. When will brands and celebrities finally hit their personal ceilings for ridiculousness? To quote Maya Rudolph playing Dionne Warwick on The Unbreakable Kimmy Schmidt, “To what end? TO WHAT END?”

While the cinematic style of Super Bowl commercials has always been a fun mainstay of America’s most gluttonous unofficial holiday, I think we have to ask ourselves if we’ve gone too far. To keep your attention, advertisers have moved past infiltrating podcasts with homespun advertisements to butchering their long-running mascots on national TV, Hunger Games-style, in the pursuit of a viral moment. And I suppose we play a role in all of this, because resorting to actual legume death managed to capture our attention when little else does.

You want my money, brands? Send me a dang coupon and give me reliable product. Get a 30-second spot during the Super Bowl, put up a card that says, “I bet you want some Planters peanuts right now,” and you know what? I’ll probably start craving peanuts, because that’s how my belly works. There’s already been too much bloodshed. Last year, it was the dignity of celebrities. This year, it’s an actual peanut man, exploded to bits of shell like the floor of a Texas Roadhouse.