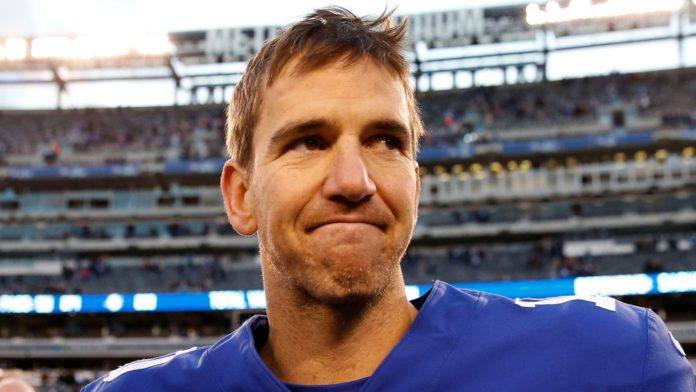 New York Giants quarterback Eli Manning is retiring from the NFL after 16 seasons.

Manning will hold a farewell press conference on Friday.

Manning was named MVP in both games, one of five players in NFL history who have earned that honour. The others are Joe Montana, Bart Starr, Tom Brady and Terry Bradshaw.

The four-time Pro Bowler was benched this season in favour of rookie quarterback Daniel Jones and was set to become a free agent in March.

Manning has decided to retire as a Giant rather than play elsewhere.

“For 16 seasons, Eli Manning defined what it is to be a New York Giant both on and off the field,” said John Mara, the Giants’ president and chief executive officer.

“Eli is our only two-time Super Bowl MVP and one of the very best players in our franchise’s history. He represented our franchise as a consummate professional with dignity and accountability.

“It meant something to Eli to be the Giants quarterback, and it meant even more to us. We are beyond grateful for his contributions to our organisation and look forward to celebrating his induction into the Giants Ring of Honour in the near future.”

Manning finishes his career 57,023 career passing yards and 366 touchdown passes, which are both the seventh most in NFL history.

His record as a starter in the regular season is 117-117. His record in the playoffs stands at 8-4, with five of those wins coming on the road.

“We are proud to have called Eli Manning our quarterback for so many years,” said Steve Tisch, Giants chairman and executive vice president.

“Eli was driven to always do what was best for the team. Eli leaves a timeless legacy with two Super Bowl titles on the field and his philanthropic work off the field, which has inspired and impacted so many people.

“We are sincerely thankful for everything Eli has given our team and community. He will always be a Giant among Giants.”