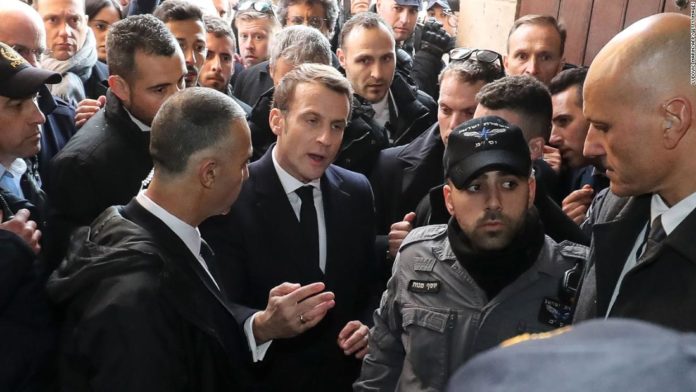 Macron, who is in Jerusalem to attend a large Holocaust remembrance event on Thursday, was visiting the Church of Saint Anne, which belongs to the French government and is considered to be French territory, when he was filmed admonishing the security officers for apparently trying to follow him into the church.
“Everybody knows the rules. I don’t like what you did in front of me. Go outside!” Macron was seen shouting.
The Roman Catholic church, which dates back to the 12th century, was gifted to Napoleon III by the Ottoman Sultan in 1856.
“Please respect the rules, they are [in place] for centuries. They will not change with me, I can tell you,” Macron added during the dispute.
A spokeswoman for the Elysée Palace told CNN that the President had intervened after an exchange between French and Israeli security.
“St. Anne belongs to France in Jerusalem. It is up to France to protect these places in this city. The Israeli security forces wanted to enter while security was being provided by French security services. The president reacted to an altercation between the Israeli and French security forces at the time of entering Saint Anne in order to end it, and to remind everyone of the rules that apply,” the spokeswoman said.
Israeli officials described the incident between Israeli and French security officers as a “discussion” and said the visit had passed off according to plan.
“Based on the terms agreed upon ahead of time, an Israel Security Agency (ISA) guard and a policeman escorted the French president and his delegation inside,” a joint police and ISA statement read.
President Macron had apologized about the incident once the delegation had concluded its visit to the church, the statement added.
A spokeswoman traveling with Macron declined to confirm if the President did apologize, saying, “I don’t know. I didn’t witness that moment.”
France does not recognize Israeli sovereignty over the Old City, as it lies in the eastern part of Jerusalem, which it regards as occupied territory. That characterization, which most of the rest of the world shares, is disputed by Israel, which regards all of Jerusalem as its sovereign territory.
Wednesday’s clash bears a strong resemblance to an incident in 1996 when then-French President Jacques Chirac was also filmed in heated exchanges with Israeli security during a visit to the same church.
Macron is one of more than 40 world leaders who will be attending the Fifth World Holocaust Forum in Jerusalem, along with, among others, Russian President Vladimir Putin, US Vice President Mike Pence and Britain’s Prince Charles.