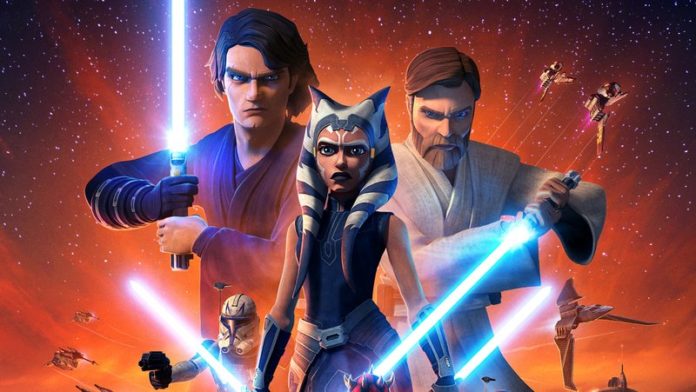 After more than four years since the sixth season of Star Wars: The Clone Wars had aired its last episode in 2014, Disney+ has finally released the official trailer for the highly-anticipated seventh and final season of George Lucas’ beloved and critically-acclaimed Star Wars animated series which is scheduled to premiere on Friday, February 21. Featuring our first preview at the new Clone Wars episodes, you can check out the trailer in the player below along with the full poster!

From Dave Filoni, director and executive producer of The Mandalorian, the final season of Star Wars: The Clone Wars will continue the storylines introduced in the original series, exploring the events leading up to Star Wars: Revenge of the Sith.

The 12-episode season will feature the voices of Matt Lanter as Anakin Skywalker, Ashley Eckstein as Ahsoka Tano, Dee Bradley Baker as Captain Rex and the clone troopers, James Arnold Taylor as Obi-Wan Kenobi, Katee Sackhoff as Bo-Katan, and Sam Witwer as Maul.

Even though The Clone Wars will be having its epic conclusion this year, it appears it won’t be the end for the animated Star Wars universe as SWNN has also revealed that a sequel series to Rebels is currently in development to pick up the story of Ahsoka from the series finale and could premiere as early as this year.