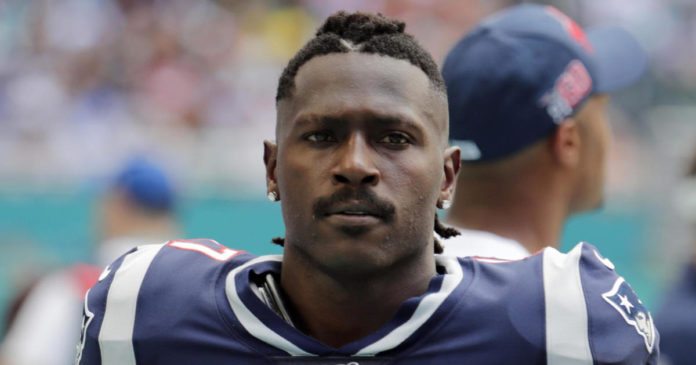 An arrest warrant for free agent wide receiver Antonio Brown was issued Tuesday after a man claimed he was assaulted by Brown and his trainer. Brown is being charged with one count each of burglary with battery, burglary of an unoccupied conveyance and criminal mischief less than $1,000, according to the Hollywood Police Department.

Police responded to a call at Brown’s Hollywood, Florida, home Tuesday where they arrested his trainer, Glen Holt. Holt was taken into custody without incident and charged with burglary with battery. Police were unable to “make contact” with Brown, however, and he has yet to be arrested.

Brown had previously worked with the police department’s youth football team, but they cut ties with him earlier this month after a confrontation with both officers and the mother of his three children. The former New England Patriots player posted video of himself yelling at police and the woman. Police had responded to that incident on a call for domestic disturbance.

Brown was released from the Patriots in September after he was accused of sexual assault in a federal lawsuit. He was also dropped by Nike.

Also a former Pittsburgh Steeler, Brown began the 2019 NFL season as a member of the Oakland Raiders. But after a number of on and off-field incidents, including a fight over being allowed to use his old helmet during games, he was released before the regular season.