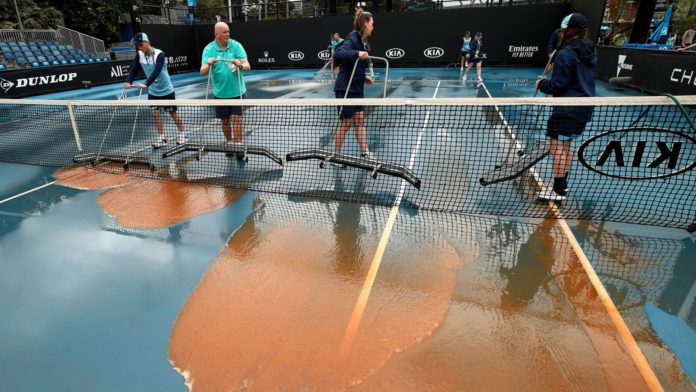 Climatic conditions played havoc with the Australian Open again on Thursday as dust carried from the outback coated the courts.

Heavy rain on Wednesday evening dumped the dust all over the city, with the Yarra river turning brown, and, when it cleared on Thursday morning, it became clear the Melbourne Park groundstaff had a lot of work to do.

Play started as scheduled on the three courts with roofs, which had all been covered, but it was delayed by three hours on most of the outside courts, and then further by more heavy rain.

Last week qualifying was disrupted by smoky haze from the wildfires and a thunderstorm that brought huge hailstones.

The start of main draw action on Monday, meanwhile, coincided with the wettest day in the city for nearly a decade.

Play continued as scheduled on the three courts with roofs, and second seed Karolina Pliskova eased into the third round with a 6-3 6-3 victory over Laura Siegemund.

“I’m happy to get through this was an ugly match for me, said the Czech, who will next face either Russia’s Anastasia Pavlyuchenkova or American Taylor Townsend.

Following her win, Muguruza reflected on her gritty effort to climb Mount Kilimanjaro during the off season.

“I wanted to have a reachable challenge, because if I pick another one, I put myself in a very risky situation, it was enough [of a] challenge to come back,” Muguruza told reporters.

“I really like the experience to see myself in the middle of nowhere, having one clear thought just to keep climbing – it was a good experience.”

“I’m super happy to get the match out of the way. I didn’t know the courts were, like, wet and dirty and all that,” Bencic told reporters.

“It was difficult today. It was sometimes sunny and then suddenly was almost raining. Then windy. Yeah, you just kind of have to accept it and go with it and try your best.”

Former champion Angelique Kerber made it through to the next round after easing past Australian wild-card entry Priscilla Hon 6-3 6-2.

Kerber will next play either Russian veteran Svetlana Kuznetsova or Italy’s Camila Giorgi.