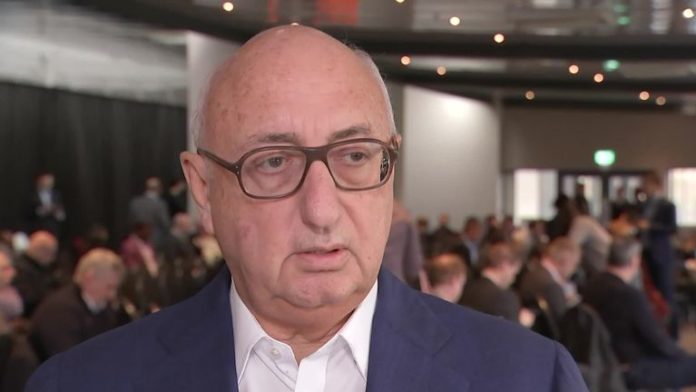 Gareth Bale’s agent, Jonathan Barnett: “People at FIFA just think they know what agents do, when they don’t have a clue. They don’t consult properly, and they don’t engage with us in a meaningful way.”

Football’s top agents have threatened legal action against FIFA over plans to cap their fees for transfers.

Sky Sports News’ chief reporter Bryan Swanson spoke to some of the game’s most powerful representatives after a meeting of the Association of Football Agents [AFA] at Barnet’s stadium, The Hive.

Last year, FIFA announced plans to limit agents of the selling club to a maximum of 10 per cent of the transfer fee and a 3 perc ent cap of the player’s fee.

It has led to a furious response from some of the game’s most influential representatives, who want FIFA to hold more talks with them before their proposals are turned into regulations.

Mel Stein, AFA life president, says: “We’re going to be writing to FIFA and, once there is a formal consultative process in place, where all parties can bring their proposals to the table, we will be eager to meet with them.”

How are agents feeling?

Extremely irritated, to put it mildly.

“We want fairness,” explained Jonathan Barnett, who represents players including Gareth Bale, Luke Shaw and Jordan Pickford. “We act for players, we don’t act for FIFA. People at FIFA just think they know what agents do, when they don’t have a clue. They don’t consult properly, and they don’t engage with us in a meaningful way.”

Mino Raiola, who represents players including Zlatan Ibrahimovic, Paul Pogba, Moise Kean and Erling Haaland, told Sky Sports News: “This was a very important meeting. If you look at the history of the world, justice always wins. We will win.”

They believe it is unfair to introduce a cap, as it does not happen elsewhere in the game or other industries.

“Why attack agents? FIFA is raising their ticket money every year. Why does FIFA want all their transfer monies in the FIFA bank? This is only about power. They have to get some victories.”

Yes and, potentially, at multiple courts around the world.

“I don’t think FIFA are willing to talk,” says Barnett. “But I’m in the minority. We would love to talk to them. We will try everything with FIFA but, if necessary, we will go to every court in the land, from around the world.”

How has FIFA responded?

Robustly. They will point to several consultation meetings, including a task force discussion in August 2018 at FIFA HQ in Zurich, attended by agents including Barnett, Rob Jansen and Dr Erkut Sogut.

FIFA says its proposals will “improve transparency, protect player welfare, enhance contractual stability and raise professional and ethical standards. In other words, to eliminate or at least reduce the abusive and excessive practices which unfortunately have existed in football.”