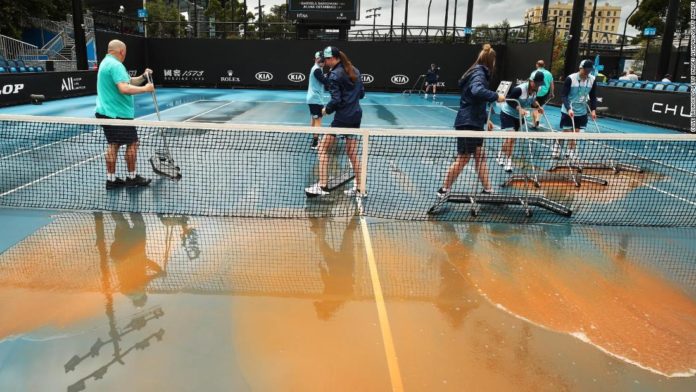 High pressure cleaning was required to remove the sediment that was brought down by heavy rain.
Play eventually got underway in the afternoon, with courts five and 11 having to wait until 4:15pm local time to see action.
Visit CNN.com/sport for more news, videos and features
“Due to the rain and dust overnight the outside courts need high pressure cleaning, which is currently underway,” said a statement from tournament organizers on Twitter.
“Our team is working across Melbourne Park to prepare the outside courts for play.”
READ: Caroline Wozniacki accuses opponent of gamesmanship
Showers also caused further disruption with Ernests Gulbis and Aljaz Bedene having to go back inside after playing four games.
Smoke from the bushfires caused havoc in the buildup to the tournament, forcing qualifying and practice to be suspended because of poor air quality that saw a backlash from a number of players.
Matches took place as planned on Melbourne Park’s three showcourts, with world No. 5 Dominic Thiem surviving a scare against Australian wildcard Alex Bolt after trailing 2-1.
The Austrian eventually prevailed 6-2 5-7 6-7 (5-7) 6-1 6-2 to reach the third round.
There were also victories for fourth seed Daniil Medvedev over Spain’s Pedro Martinez Portero and seventh seed Alexander Zverev against Belorussian Egor Gerasimov, both winning in straight sets.
World No. 2 Karolina Pliskova was the highest-ranked player in action in the women’s draw, seeing off Germany’s Laura Siegemund 6-3 6-3, while 2016 champion Angelique Kerber defeated Australian wildcard Priscilla Hon 6-3 6-2.