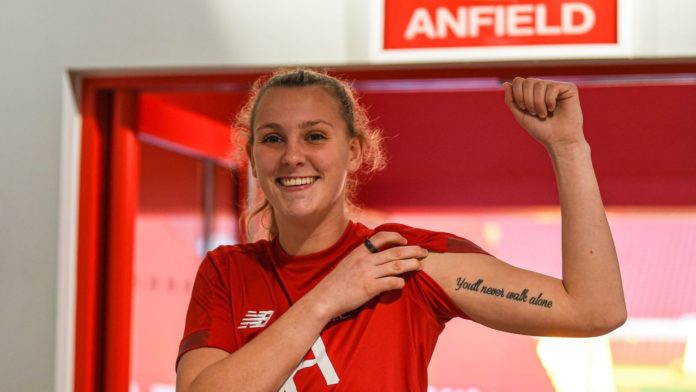 Canada U20 international Foster has been a Liverpool fan since childhood; English clubs have until 5pm on Thursday to make signings

Liverpool Women have made a Deadline Day move to sign goalkeeper Rylee Foster.

Foster, 21, joins the WSL club after finishing her career in the American college system with West Virginia University.

The Canada U20 international played 84 times during four years at West Virginia, keeping 39 clean sheets, and was named on the MAC Hermann Trophy long list for the most outstanding college player of the year in two successive years.

She joins three days after Liverpool ‘keeper Fran Kitching suffered a serious cut to the head and face during a training session.

Foster, who is a Liverpool fan and has a ‘You’ll Never Walk Alone’ tattoo on her arm, said: “It’s been a dream for me to play for Liverpool since I was a young kid.

“I’m going to come in, work hard and do everything I can to help out.

“I got the tattoo in 2014 after my grandmother passed away. My grandparents are both from Wavertree in Liverpool but moved away during the war. It’s just a commemorative thing to show that they are always with me.”

Liverpool manager Vicky Jepson added: “Rylee is a good signing for us. It’s about signing a good quality goalkeeper that brings competition to our current squad. She’s a fantastic fit for us for the future.

“We’re glad to have such a young, talented individual join our squad that will add strength. She’s settled in well and we’re looking forward to seeing what she’s capable of.”

Bristol close in on Logarzo

Bristol City are finalising a deal to sign Australia international Chloe Logarzo, who will join from Sydney FC after winning the W-League last season.

The 25-year-old midfielder has played 41 times for her country, scoring seven goals.

Arsenal, fresh from their 4-1 home defeat to title rivals Chelsea at the weekend, are in talks to sign Australia forward Caitlin Foord.

Negotiations have been going on for most of the winter window and the 25-year old has already said goodbye to her Sydney FC team-mates.

Deadline Day in the WSL is likely to be quieter than many football fans are used to seeing in the men’s game mainly due to tighter budgets and better financial planning.

New FIFA research shows more than 86 per cent of international deals involve players that are out of contract and just £551,000 was spent on transfer fees between clubs around the world in 2019.

Deals including a fee are less common in the women’s game, players tend to move when out of contract and transfers are usually planned weeks, if not months, in advance so teams don’t go over budget.