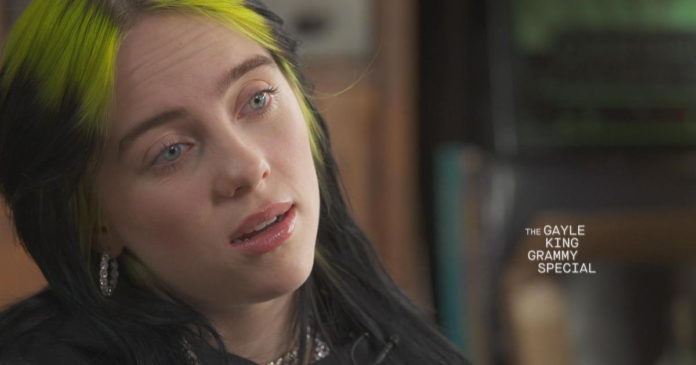 Billie Eilish is as changeable as the color of her hair. There’s the fun Billie, singing in her car, and then there’s the serious Billie.

“I didn’t ever think I would be happy again. Ever,” she said about 2018, speaking to “CBS This Morning” co-host Gayle King for “The Gayle King Grammy Special,” airing on CBS Thursday at 10 p.m. ET.

Eilish’s struggles are no secret to her fans. She often refers to them in her lyrics.

“It is,” Eilish said, but added that it’s about “how terrifying the feeling of love is and how debilitating it is.”

Eilish, who was nominated for six Grammys, also makes it a point to be a source of support for fans who are struggling themselves. Once a self-harmer who hid cuts on her arms, she now reaches out to fans with cuts on theirs.

More of King’s conversation with Eilish and other big names in music will air on CBS in “The Gayle King Grammy Special” on Thursday at 10 p.m. ET. The Grammys will air Sunday night at 8 p.m. ET on CBS.

If you or someone you know needs help, contact the National Suicide Prevention Lifeline at 1-800-273-TALK (8255) or the Lifeline crisis chat. In an emergency, call 911.