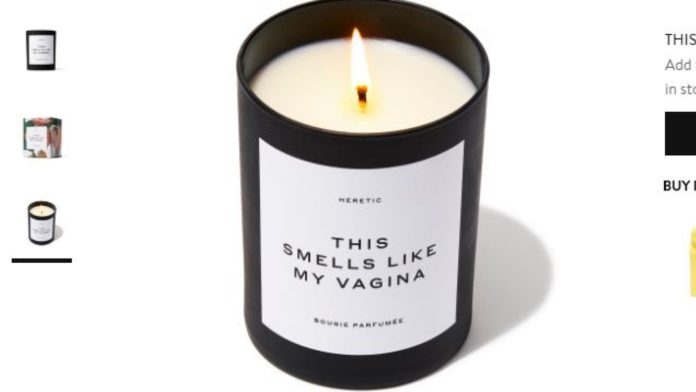 When Gwyneth Paltrow launched her “This Smells Like My Vagina” candle earlier this month, it sold out pretty much straight away.

Hitting headlines and inspiring numerous column pieces, the interestingly named product is the latest in a line of unusual items released through the star’s wellness and lifestyle brand Goop.

Now the Oscar-winning actress has explained where the idea came from, saying the candle is a “punk rock” statement of sorts.

Speaking on US chat show Late Night With Seth Meyers, the 47-year-old also said the candle can be seen as something to hit back against the “shame” many women feel about their bodies – and joked that she was high on hallucinogenics when she thought of the title.

“So it sort of started as a joke,” she said. “I was with [perfumer] Douglas Little for his brand Heretic, and we were kind of messing around and I smelled this beautiful thing and I was like, ‘This smells like my vagina’, and I was kidding, obviously.”

“We were on mushrooms,” Paltrow then joked, before adding: “No, we weren’t!”

The star continued: “But then it actually became kind of a funny thing, where it was really funny to us but also a little bit punk rock.

“I think women, a lot of us have grown up feeling certain degrees of shame or whatever around our bodies or whatever, so this is just a little bit of a subversive candle for all of us out there.”

Sold for $75 (£58), the candle is described on the Goop website as having “a funny, gorgeous, sexy, and beautifully unexpected scent”, and made with “geranium, citrusy bergamot, and cedar absolutes juxtaposed with Damask rose and ambrette seed to put us in mind of fantasy, seduction, and a sophisticated warmth”.

During the interview, Paltrow joked several times about being under the influence of hallucinogenic mushrooms, including when she mistakenly said she had partnered with Royal Caribbean to launch a Goop cruise, rather than Celebrity Cruises.

“I got the cruise wrong because I’m on mushrooms,” she joked.

Paltrow considers the impact of psychedelic drugs, including mushrooms, in The Goop Lab – her new Netflix documentary series about her lifestyle and wellness brand.

The streaming service describes the series as “a curiosity-driven exploration of boundary-pushing wellness topics”.

Goop has faced criticism from health professionals for making unsubstantiated health claims, such as the importance of vaginal steaming and the use of vaginal eggs.

In 2018, the lifestyle company paid out more than £100,000 in civil penalties over products including egg-shaped stones intended to be placed into the vagina to improve health.

Prosecutors in eight counties in California announced the settlement after an investigation found some of Goop’s health claims were unfounded.