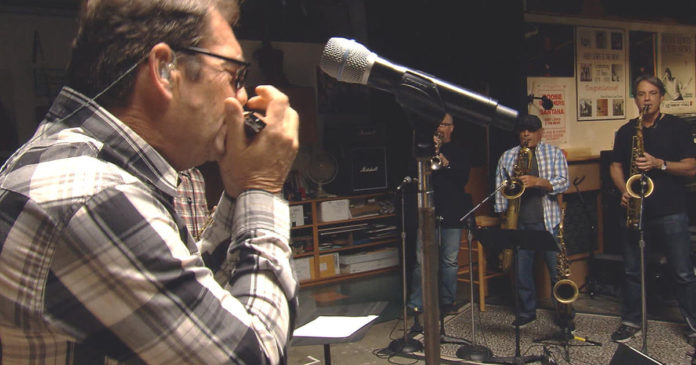 (CBS News) Years ago Huey Lewis and the News sang that it was “Hip To Be Square.” So what’s new with Huey Lewis these days? John Blackstone tracked him down for A Summer Song:

In Montana’s Bitterroot Valley, not only does a river run through it, when the fly fisherman is Huey Lewis, a rhythm runs through it.

“If I’m saltwater fishing or something, I’ll strip [a bug] to a certain song,” Lewis explained to Blackstone.

Listen closely enough and you might just hear the heartbeat of rock ‘n’ roll.

The platinum records hang on the wall of Lewis’ rehearsal space near San Francisco. And on “Sports,” was not one hit or two, but at least four.

Lewis is marking this 30th anniversary of “Sports” with a tour, and the release of a re-mastered CD.

WEB EXTRA VIDEO: Huey Lewis talks about his love of music, and of dealing with success after years of struggle.

While the music business has gone through many changes in 30 years, it’s meant Lewis’ fans have bought the same songs more than once — on vinyl, then tape, then CD, then download.

“Timing was very good to us,” Lewis quipped.

Not only has his music lived on since the 1980s, but so has much of his wardrobe. Lewis showed off the original “Heart of Rock & Roll” coat, “made famous through MTV,” he laughed. “I could probably get something on eBay for that!”

When Lewis had his first Top 10 hit, “Do You Believe in Love” in 1982, music videos were in their infancy.

“I thought it was the worst thing I’d ever seen, just cringe-worthy,” Lewis said of the song’s video. “It was so silly and stupid. And at the end, everybody stood up and applauded. So I thought to myself, ‘Well, anybody can do this! Let’s do the videos ourselves.'”

From then on, they produced their own music videos . . . apparently not taking themselves too seriously.

“We weren’t really concerned with our image that much,” Lewis admitted. “I mean, I don’t even have a tattoo, you know?”

And his hobbies — golf and fly fishing — don’t necessarily match the usual image of a rock star. “It’s okay, though, isn’t it?” he said, waist-deep in the stream. “I mean, where would you rather be?”

Now 62, he spends as much time as he can on his ranch in Montana. “In the early ’80s when we finally had a little bit of success and I had a couple nickels to rub together, the first thing I wanted to do was to buy a place up here. And that’s what we did.”

Part of his 500 acres is a working ranch with crops and cattle. Part of it is kept as wild land.

“Let’s talk about Huey Lewis as a country gentleman — is that how I should describe you on this land?” Blackstone asked.

“You can describe me however you want, John!” he laughed. “No, I love it out here. It’s a chance to decompress, as they say.” Just then, his phone rang. “Sorry.”

Early in his career the phone didn’t ring nearly enough. He spent most of the 1970s playing harmonica in a band called Clover. By 1980, in spite of his boyish good looks, he was getting on.

“Thirty years old is old in this business, for starters,” he said.

“You said you turned 30 with $300,” said Blackstone. “You’d been a professional musician for, what, more than a decade? Things weren’t going too well.”

“No. But, you know, in retrospect they weren’t going too well, but I was fine. I was convinced, first of all, that we were about to make it, next week. And I was improving. And I loved what I do.”

He formed his own group: Huey Lewis and the American Express. But when they signed to make a record, the name had to go.

“They were afraid that American Express would sue us for the name,” Lewis said. “And so we had 24 hours to come up with a new name. Came up with ‘The News.’ “

WEB EXTRA VIDEO: Huey Lewis shows John Blackstone some of his stage wardrobe from the earliest days of MTV.

“We had a little discussion: We said, ‘Look, guys, enjoy this, because you only go from obscurity to number one once. This is gonna be a great thing, let’s enjoy it.’ And I can honestly say we did.”

“Yeah, well, we experimented!” he laughed. “We’re no saints. But at a certain point the thrill is being able to play music and have people show up. It’s a career that you wanna do. You wanna play music for a living.”

In 1985 Lewis was among the biggest names in music, literally — one of the galaxy of stars who recorded “We Are the World” to fight famine in Africa. That’s where he met Bob Dylan.

“Yeah, meeting Dylan was great. He sent me a little handwritten note and a song, which I never recorded. Note to self! When Bob Dylan gives you a song, record it.”

Most of his songs he has written himself or with members of his band.

He wrote “The Power of Love” for the 1985 movie, “Back to the Future.” The song became a number one hit, and was nominated for an Academy Award, Lewis was also given an unlikely cameo in the film.

The passage of time seems to have meant little to Huey Lewis and the News. Most of the original members are still in the band.

“It’s really a family operation,” Lewis said. “And people say, ‘Are you still friends?’ Well, you know, ‘friends,’ it’s way deeper than that. We’re like brothers, you know?”

What’s the secret of staying together so long? “We pay well,” Lewis laughed. “We work hard, but not too hard. And we create a nice atmosphere. It’s a great job.

“We’re very lucky – and we try to remember that.”

With the re-release of “Sports,” they’ll spend many weeks this year on the road, playing 80 concerts.

“You ever think, though, ‘I’ve worked enough, it’s time to kick back’?” Blackstone asked.