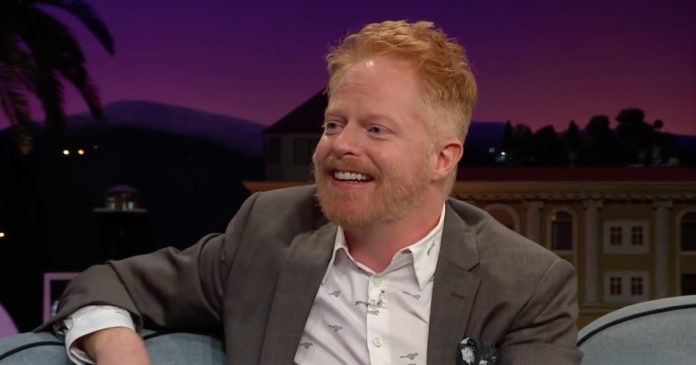 Jesse Tyler Ferguson is going to start a “modern family” of his own. The actor announced on “The Late Late Show with James Corden” that he and husband Justin Mikita are expecting their first child together.

The reveal came after host James Corden mentioned fellow guest Charlie Hunnam is hitting a milestone  — his 40th birthday. Ferguson, who is 44,  chimed in to say turning 40 is when you “finally become an adult… like ‘I need to start getting serious about things.'”

“Actually, this is something I haven’t even mentioned to anyone — if we can keep this between us three and you all,” he said gesturing to the audience. “I’m actually expecting a baby in July with my husband.” The crowd erupted with cheers and Ferguson joked, “Let’s just keep it between us.”

He didn’t reveal if he and Mikita are having a boy or girl, just saying that they’re having “a human.”

On “Modern Family,” the actor plays Michell Pritchett, an uptight lawyer who married his longtime partner, Cameron, and adopted a baby girl named Lily. The sitcom chronicles their journey to fatherhood and raising their daughter.

It appears life imitates art. In real life, Ferguson is married to a lawyer and now they’re about to become dads. The pair wed in 2013.

Mikita is also an activist. He and Ferguson started the nonprofit organization “Tie the Knot,” which raises money and awareness for same-sex marriage and LGBTQ rights while also providing stylish bowties and other accessories for couples to wear during their nuptials.

“The goal of Tie The Knot is clear: to advocate for LGBTQ civil rights throughout the United States & beyond, and to look damn good while doing it,” the organization’s website reads.

On “The Late Late Show,” Ferguson didn’t reveal many details about his and Mikita’s future bundle of joy, but he did open up about the end of “Modern Family.”

“It’s incredibly sad. It’s something I’ve been doing for 11 years — that’s like first through eleventh grade as a kid. That’s a lifetime,” he said about the show’s upcoming ending. “We’ll never have a job this good.”

“I’m big with an ‘Irish exit.’ I do not like long goodbyes, so maybe that’s what I’ll do. After my last scene I’ll just leave the lot and just  drive home,” he said, receiving laughs from the audience. “I think that’s the only way I’ll be able to manage this. It’s really emotional.”

Corden put things in perspective for Ferguson: “On your last day of ‘Modern Family,’ knowing what we know now, you should think I’m leaving ‘Modern Family’ behind, but come July, you’re going to make your new modern family — and it’s going to be beautiful.”