Home Culture ‘Star Trek: Picard’ slowly goes where the franchise has gone before 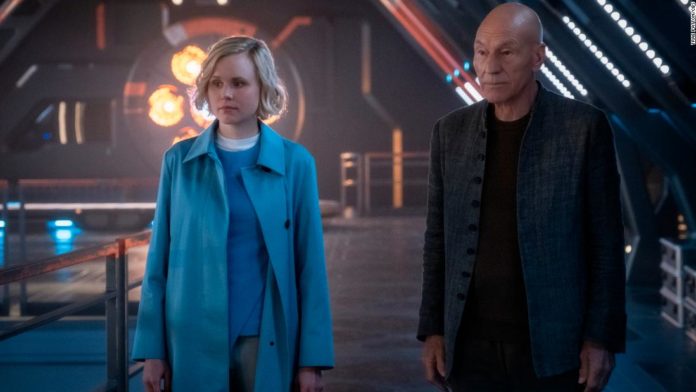 Patrick Stewart is back, 33 years after “Star Trek: The Next Generation” launched, and 18 years since last suiting up for a “Trek” movie as Jean-Luc Picard, the eloquent captain of the Enterprise. He’s obviously a bit more sedentary (Stewart is now 79) and less a man of action, but the poetry in those elegant line readings still lingers.
Unlike the old series, though, “Picard” — developed by novelist Michael Chabon, part of a producing team that includes “Star Trek: Discovery’s” Alex Kurtzman and Akiva Goldsman — is a heavily serialized, densely plotted affair, one that only finally begins taking shape after the third episode.
The sluggish pace thus begins to drain interest, at least for those who didn’t hang on “Next Generation’s” every wrinkle. That leaves the prospect of upcoming “Next Generation” cameos (“special guest stars,” as they’re billed) as perhaps the best incentive to stay aboard, as opposed to where the story’s ultimately heading.
At least initially, this feels like a different “Star Trek” iteration, with Picard having resigned from Starfleet, and taken up residence — a bit restlessly — at a serene vineyard in France. (Much of the early action takes place on Earth, and the shimmering glimpses of the planet’s future are hopeful, even by “Trek” standards.)
Soon, however, Picard is drawn into a rather elaborate mystery, one that involves some old intergalactic friends — and foes. Backed up by a pair of Romulans (Orla Brady, Jamie McShane) who live at the vineyard, and an adorable dog named Number One, he gradually decides he’ll need allies to find out what’s happening, deciphering the mystery of a young woman (Isa Briones) who comes into his orbit.
It’s best not to spoil the exact nature of why she’s special, but the plot provides the wistful Picard with a personal connection. Eventually, the story brings together a cast that includes Alison Pill, Santiago Cabrera, Michelle Hurd, and Evan Evagora.
Recognizing the power of avid fan bases in navigating the streaming universe, CBS All Access has heavily relied upon “Star Trek” to try reeling in subscribers, having launched on the back of “Discovery” in 2017. In some respects “Picard” is a lower-key, less traditional show, but it has the advantage of constructing the narrative around a beloved character, however convoluted it might be.
Mirroring the show, CBS is clearly playing a longer game, renewing the series for a second season in advance of the premiere. That could be seen as an act of faith, but it’s also an acknowledgement that the title and talent alone are, for the purposes of streaming, half the battle.
Picard is told, at one point, to “be the captain they remember,” a line that speaks as much to the rationale for the program as it does to the character. But just wishing isn’t enough, as Picard was fond of saying, to make it so.
“Star Trek: Picard” premieres Jan. 23 on CBS All Access.