Home Sport ‘It was a really good team effort’ 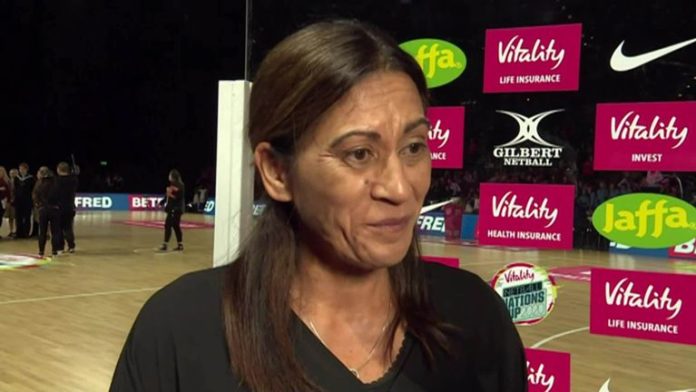 Dame Noeline Taurua praised the Silver Ferns’ team effort and their ruthless finishing after a second victory in the Vitality Nations Cup.

The world champions haven’t missed a beat since arriving in England despite taking to court without the recently retired Maria Folau and Casey Kopua.

Laura Langman and Katrina Rore are absent too due taking sabbaticals from international netball.

The quartet’s absence has done little to derail the side and instead Taurua’s squad have looked a cut above the rest and recorded comfortable victories over England and Jamaica.

Take a look back at the match in full via the stream on the Sky Sports YouTube channel.

Following their first win in four against the Sunshine Girls, Taurua shared that she went into the clash confident that her side would get the job done.

“I’m really pleased with the outcome. I think it was a step up for us, the structures are tightening up and it was a really good team effort,” the head coach said.

Hasn’t Mia Wilson been doing some work! Really impressive form from the @SilverFernsNZ GS! If you like attention to detail, you’ll notice a small change in her shooting technique from last year. Much more fluent and smooth. This NZ team is so good to watch ? #NationsCup

Maia Wilson shot at 93 per cent during the Test and produced the highest tally of goals she’s recorded in a match for the Silver Ferns.

That impressive performance added to her securing 27 goals from 29 attempts against England a few days prior. Naturally, Taurua is delighted with Wilson’s work.

“It was outstanding actually. I’m so pleased that she was able to back it up from the last match,” she said of her shooter.

“Consistency is one of the things that we’re looking to be better at. I thought not only was she [Wilson] good with her shots, but she was also smart and strategic.

“Jamaica have some outstanding defenders, so I’m really pleased for that whole circle and the attacking end.”

Over the course of the Silver Ferns’ opening two matches, the head coach has tried a wealth of combinations in her shooting end and in doing so, has gained much greater clarity on their abilities.

“The good thing is that we do have combinations which is always pleasing,” she said.

“One of the objectives was to win the games but also have a balancing act, in terms of getting people out on court.

“Some of the players are really standing up and I’m really pleased about that. I thought Te Paea Selby-Rickit was a bit dodgy early on but I was really happy with how she came back on.

“They’re very competitive and overall, I’m really pleased with what we’re putting out there.”

The Silver Ferns held a 10-goal lead at the interval against Jamaica. They pressed that out to a 20-goal cushion at three-quarter time before winning by a final margin of 46.

“Every time we get out there, irrelevant of the opposition, we just want to incrementally improve.

“Ruthless is really good, thank you for saying that, and we’ll take that and we’ll look forward to our next game against South Africa.”

Sky Sports is your home of netball – every moment of the Vitality Nations Cup is being shown on air and streamed on YouTube. The third match-day is on January 25, with New Zealand versus South Africa and England against Jamaica.