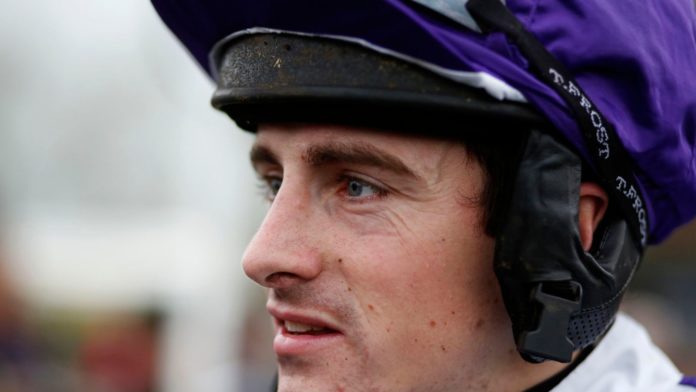 Brian Hughes stretched his lead over the injured Richard Johnson to four in the National Hunt jockeys’ championship at Wetherby – but is adamant his title bid is “by no means an open goal”.

Charmant’s 23-length win, at odds of 16-1, in the Follow At RacingTV On Twitter Handicap Chase took Hughes to 115 for the season.

Johnson, champion in each of the last four years, is on the sidelines after breaking his arm in a fall at Exeter on Tuesday – and Hughes’ other nearest challenger Sam Twiston-Davies trails by 29.

Hughes nonetheless said: “This is by no means an open goal. I have to stay in one piece – and Richard Johnson will be back.

“As he’s shown in other years, he’s a determined man.”

Should Hughes prevail at the end of April, he will become the first northern-based winner of the title since Jonjo O’Neill in 1979-80. He is wary of the pitfalls of jump racing, however.

“What happened to Richard Johnson proves what a jump jockey lives with day to day – you’re only one fall away from your season being over,” he said.

“One minute you’re up, the next you’re down.

“Don’t get me wrong – I’d absolutely love it (to win the title).

“But it’s by no means a foregone conclusion. You try not to put it at the forefront of your mind – something that then clouds your judgement.”

He admitted, after James Ewart’s Charmant was left clear by The Paddy Pie’s unlucky fall at the third-last, that his judgement was momentarily awry at the next fence, where his partner made the necessary adjustment.

“That was jockey error – I went and squeezed him for something that wasn’t there,” he said.

“Luckily he’s cleverer than me! I left him alone at the last.”

Tavus had earlier kept himself on course for a possible trip to the Cheltenham Festival as he returned to winning form in the Every Race Live On Racing TV Juvenile Hurdle.

Jedd O’Keeffe’s youngster could not handle Triumph Hurdle hope Allmankind when sixth of eight in the Grade One Finale at Chepstow last time.

But after Hughes and market rival Dark Lochnagar took an early fall, Tavus made no mistake under Joe Colliver for a three-length success at 2-1, his second win in three over jumps.

Asked if a trip to Cheltenham in March beckons for the Boodles Juvenile Handicap Hurdle, O’Keeffe said: “I’m sure he’ll have an entry.”

The North Yorkshire trainer hopes a move back up in class may suit Tavus, a three-time winner on the Flat for Roger Charlton.

“I’d like his jumping to tidy up,” he added.

“I think he might jump a bit slicker in a better race – but he’s going to need to, isn’t he?”

The Hay-on Wye trainer was left out of pocket when both Itsamanslife and stablemate Clondaw Rigger – again in opposition here – made the seven-hour round trip cross-country to Huntingdon this month only for that meeting to suffer a late abandonment because of flooding.

She had plenty more to smile about after the seven-year-old ground out victory at 17-2 under Ben Poste, from favourite Dino Boy.

For good measure, Price also found herself voicing an impromptu commentary in the straight, for part owner Nick Elliott – on holiday in the Caribbean and unaware there was a delayed start while the horse ambulance regained its position following an injury in the previous race.

She said: “You go through highs and lows in racing, and you think ‘it’ll get better tomorrow’ – and it doesn’t.

As for her commentary skills, she is not anticipating an imminent change of profession.

Price added: “The other owner (in partnership with the McLeish family) is on holiday in Barbados – he didn’t realise there was a delay to racing, so he rang me as they were coming round the final bend and said ‘What’s the result?’

Price was not the only long-distance traveller to make the trip to Wetherby worthwhile.

Devon trainer Nigel Hawke’s Pola Chance beat her elders in the racingtv.com Handicap Hurdle – the 7-1 shot symmetrically breaking her duck at the seventh attempt, by seven lengths under David Noonan,

Then in the closing Watch Racing TV In Stunning HD EBF “National Hunt” Novices’ Hurdle, Milton Harris sent Stimulating Song up from Wiltshire to win his first race too.