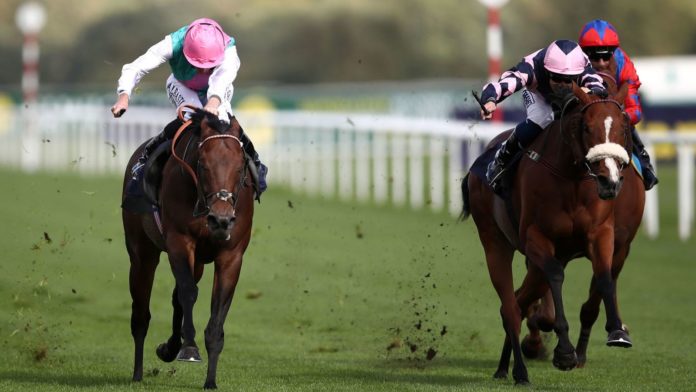 Equilateral put his name in the hat for top sprint honours this season with an impressive performance to win the Dubai Dash Listed Handicap at Meydan.

The Charlie Hills-trained five-year-old has not quite lived up to the expectations of connections in his career to date – but that could change for the better if the way he blitzed the opposition on his first start since being gelded is anything to go by.

Caspian Prince led for the first half of the race before Waady took over, with the Khalid Abdullah-owned Equilateral waiting in the wings to strike.

When James Doyle pressed the button, Equilateral put the race to bed in a matter of strides and crossed the line two lengths to the good, without being asked a serious question.

Hills – winning his first ever race at the Dubai Carnival – said: “I’m really pleased. Ever since he’s touched down in Dubai, he’s taken everything pretty well.

“He’s trained lovely. Obviously we had him gelded, although he’s never been a handful at all.

“James sat on him on Sunday and he was very pleased with him.

“We know he’s always been good fresh and we’ll freshen him up for the Group Two Meydan Sprint.

“If we can win that, then we’ll definitely try him at the (Al Quoz Sprint) over six furlongs (on World Cup night).

“I’ll speak to the family and we’ll draw up a plan with him.”

He added: “It’s exciting. He travelled beautifully through the race, if not a little bit too well, but the time was good.

“It’s lovely to see a horse like that handle the course. We can go into the race next time knowing he’s a course and distance winner.”

Doyle completed a double on Glorious Journey, who led home a one-two-three for trainer Charlie Appleby in the Al Fahdi Fort.

The five-year-old was always travelling strongly and asserted in the closing stages to beat stablemates Mythical Magic and Mubtasim in the Group Two over seven furlongs.

Doyle came in for the mount as William Buick chose runner-up Mythical Magic and it gave him a third successive victory in the race, all for the Appleby stable.

Appleby said of the winner: “He was a bit disappointing in his last start, but he has rock-solid form. The plan now is to perhaps go to Saudi for a race just short of seven furlongs, which seems perfect for him.”

Trainer Saeed bin Suroor was in tremendous form, landing a treble – headlined by Dubai Love in the UAE 1000 Guineas.

The daughter of Night Of Thunder comprehensively reversed form with her stablemate Final Song from the 1000 Guineas Trial.

Dubai Love had been beaten six and three-quarters of a length over seven furlongs three weeks earlier, but relished the step up to a mile to sweep to victory.

Down On Da Bayou led into the straight from Final Song, but Dubai Love hit top gear a furlong out to sweep into the lead and win by three and a quarter lengths under Pat Cosgrave.

It was an 11th success in this Listed race for Bin Suroor and Godolphin.

Bin Suroor said: “I said last time when she finished fourth to Final Song that she needed a trip. It really suited her and I told the jockey to try to be handy. A further trip for the Oaks is next for her.

“Final Song did not stay the mile. We will find a race for her as a sprinter.”

Dubai Future and Laser Show were also on the scoresheet for Bin Suroor.

Never far off the pace set by Zaman, the four-year-old got first run on his rivals to score by three-quarters of a length from Mick Halford’s Irish challenger Massif Central.

Laser Show had the race sewn up a long way from home as he took the Al Bastakiya Trial by four and a half lengths in the hands of Kevin Stott.