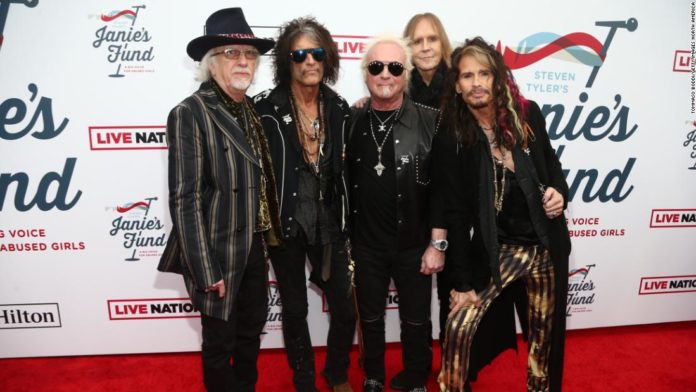 Kramer, a founder and 50-year member of the legendary fivesome, asked for an injunction to force Aerosmith to let him perform with the band at the 2020 MusiCares Person of the Year and at the Grammy Awards.
The drummer is suing for breach of contract against six companies jointly owned by the five band members, alleging he is being blocked from performing with Aerosmith after suffering “minor injuries” last spring, according to a copy of the suit obtained by CNN.
Aerosmith’s hits include “Dream On,” “Walk This Way” and “I Don’t Want to Miss a Thing.”
CNN obtained a copy of the court decision to deny Kramer’s request. It states, “Based on the evidence presented at this stage of proceedings, Kramer has not demonstrated a likelihood of proving that the defendants’ conduct breaches the covenant of good faith and fair dealing.”
In a statement Kramer provided to CNN, he said he was “extremely disappointed” but would “respect” the ruling.
“I knew filing a lawsuit was a bit of an uphill battle considering that the corporate documents don’t reference any process for a band member returning from an injury or illness,” the statement read. “However, the band waited until January 15th to tell me that they weren’t letting me play at the awards ceremonies this week. I can hold my head high knowing that I did the right thing — to fight for my right to celebrate the band’s success that I have dedicated the better part of my life to helping build.”
His complaint was filed last week. It describes Kramer as a founding member of Aerosmith and the group’s drummer for 50 years.
It states a temporary drummer was brought in after Kramer’s injuries prohibited him from performing with the band for some of its “long and lucrative” Deuces Are Wild residency at the MGM Resorts Park Theater in Las Vegas.
“By the fall of 2019, Mr. Kramer was willing and able to return to Aerosmith for the November-December run of the Residency,” the suit alleges. “Mr. Kramer announced his desire to return and formally made himself available to rehearse with the band and to attend the shows.”
But according to the lawsuit, some members of Aerosmith insisted, via their attorney, “that Mr. Kramer not be allowed to rejoin the band until he demonstrated that he was ‘able to play at an appropriate level.’ “
CNN has reached out to representatives for Aerosmith for comment.
In a statement to People, Aerosmith members Steven Tyler, Joe Perry, Tom Hamilton and Brad Whitford responded to the lawsuit.
“Joey Kramer is our brother; his wellbeing is of paramount importance to us,” the statement said. “However he has not been emotionally and physically able to perform with the band, by his own admission, for the last 6 months. We have missed him and have encouraged him to rejoin us to play many times but apparently he has not felt ready to do so.”
The band is set to be honored at the 2020 MusiCares Person of the Year event on Friday and to perform at the Grammys this weekend.
“The band’s offer to allow me to participate in this week’s MusiCares and Grammy celebrations for red carpet photo ops only, is appreciated; however, with a fill-in drummer playing on stage at two events honoring our collective musical contributions, it is extremely hurtful to me,” Kramer said in his statement.