Home World CS Soapbox: Supernatural Will Do What GoT & Star Wars Could Not—End... 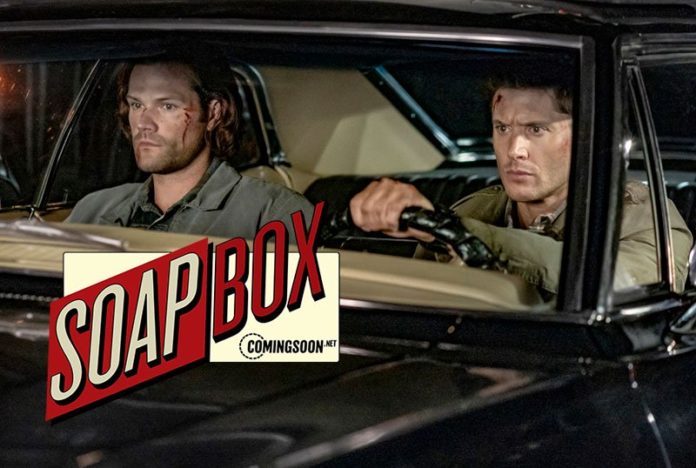 CS Soapbox: Supernatural Will Do What GoT & Star Wars Could Not—End Well

A mother of two is burned alive by an unknown entity in front of her husband and children. That husband raises his boys to save people and hunt things.

A captured princess has in her possession schematics for the evil Empire’s ultimate weapon. Her only hope of rescue lies with a moisture farmer who lives on the planet Tatooine.

A Warden of the North is called away from his home to be the hand of the king in the south. The men in his family don’t do well in the south.

What do all three of those introductions have in common? They’re good beginnings. It’s the endings that are hard. Last year saw some hard endings; Disney’s Star Wars: The Rise of Skywalker brought an advertised end to the 40-year long Skywalker saga and HBO’s fantasy series, Game of Thrones aired its eighth and final season. Consensus: both of those endings were disappointing. Hundreds and thousands of creative possibilities went out the window as those long-running stories stumbled off stage. The only acclaimed pop culture conclusion (which was hyped as much as those) was that of Avengers: Endgame—the end of a 15 film arc.

The CW’s Supernatural is in its 15th and final season. The series has been on the air since 2005, back when the CW was the WB— rubbing shoulders with Smallville. The show has followed Sam (Jared Padalecki) and Dean Winchester (Jensen Ackles) who, at first, just wanted to avenge the death of their mother, and then their focus shifted to saving the world—over and over again. What started out as relatively serialized and episodic (monster of the week) branched off into a deep and biblical mythology. The monster-hunting brothers have battled everything from urban legends to heaven and hell; they’ve done it their way, cruising the open road in their 67 Impala and listening to classic rock on the radio.

Supernatural’s original creator and showrunner, Eric Kripke, had a five-year plan for the show. That plan involved an ever-evolving Cain and Abel plotline that climaxed with the more damned brother sacrificing himself to take down the Devil, literally. That ending game to fruition in the Season 5 finale entitled “Swan Song” —the final performance of Kripke. The Supernatural creator then left the series allowing a revolving door of showrunners to figure out what would happen in the seasons that followed.

To be fair, at least a few of those seasons weren’t great; there are some that probably wish it would’ve ended back in 2010. Had it ended then, the finale would’ve been heavily debated and scrutinized. What is now retrospectively happening to The Rise of Skywalker and Game of Thrones would have happened to Supernatural (to a lesser degree because “Swan Song” was much more satisfying). Regardless, Supernatural didn’t end, it kept going and, at times felt like it was never going to end.

Even though it has been downright ridiculous at times, Supernatural’s fan base has grown thanks to things like Netflix and the tenacity of its cast and crew. The fan conventions and charitable efforts tied to the show have made the entire Supernatural community feel like a family. Above all, Supernatural’s impressive longevity has reasserted one thing: Supernatural enjoys telling its story, whatever the point of it may be. The fact that those now middle-aged actors can still ball their eyes out on The CW like they have been since 2005 speaks volumes. Oh, and the writers enjoy it, too (plus there are a lot of them, unlike Game of Thrones…)

Supernatural continues to up the ante every season and its impressive memory allows it to do so, often incorporating plot details from prior seasons. For example, this final season sees the Winchesters taking on God AKA Chuck himself, the writer of their story. In typically meta fashion (a trademark of the show that has grown with every passing season), the Winchesters are tired of being toyed with by the writer, so Chuck has decided to end their story. Everyone appears to be on board and the final season is working; the lingering sense of finality solves some of the biggest problems Supernatural has had in the past, such as the impermanence of death.

RELATED: CS Soapbox: How Does Rise of Skywalker Set Up Episode 10?

No one is going to call Supernatural’s ending rushed or overt fan service (the argument that the entire show is fan service negates the claim). It’s not about box office numbers or ego; it hasn’t been afraid to suck or upset the fans before because it has respected and loved its fans. Star Wars loves its fans as well but Disney was scared shitless of trying anything new (or of what the fans would think) and if those interviews that came out last year are any indication, Game of Thrones showrunners David Benioff and Dan Weiss didn’t give a shit what their fans thought. Supernatural is the middle ground: an average-sized network television show that is allowed to care just the right amount. To take chances and do whatever they want while still paying homage to their audience.

There will be no anti-climatic deaths of big bads (*cough* Night King) or nonsensical plot twists (*cough* Rey Skywalker).

There will be an earned amount of nostalgia as viewers think about a young Dean Winchester fleeing his house with his baby brother Sam in his arms. An appropriate feeling of adrenaline when picturing the brothers dropping a shotgun in their trunk and saying, “we’ve got work to do.” Fans will never forget them cruising the open road in their 67 Impala and listening to Bob Seger on the radio, nor will they forget Ackles and Padalecki’s dedication to bringing the Winchester brothers to life for 15 years. You have to appreciate the longest-running American live-action fantasy series of all time—even if it doesn’t end great…