Many stars end their lives as bright explosions called supernovas. Some of these explosions are much brighter than typical and give off up to 100 times more energy. Astronomers call these “superluminous supernovas” and they don’t yet understand exactly what makes them super-bright.

Now, a team of researchers has proposed an origin story for one of these superluminous supernovas, SN 2006gy. They suggest that the explosion happened in a binary star system when a small, dense white dwarf star spiraled into the core of its giant star companion.

The researchers present their findings in a new paper published Jan. 23 in Science.

In 2006, astronomers spotted a superluminous supernova, dubbed SN 2006gy, that was the brightest they’d ever seen at the time.

Later, a group of researchers led by Koji Kawabata, now at Hiroshima University in Japan, managed to capture a detailed picture of the light the supernova was emitting at various wavelengths, or colors. They saw that SN 2006gy was emitting light in combinations of wavelengths that hadn’t been seen in supernovas before.

“It was kind of a very exciting mystery,” said Anders Jerkstrand, an astronomer at Stockholm University. He teamed up with Kawabata and another researcher to figure out what was going on and write the new paper. 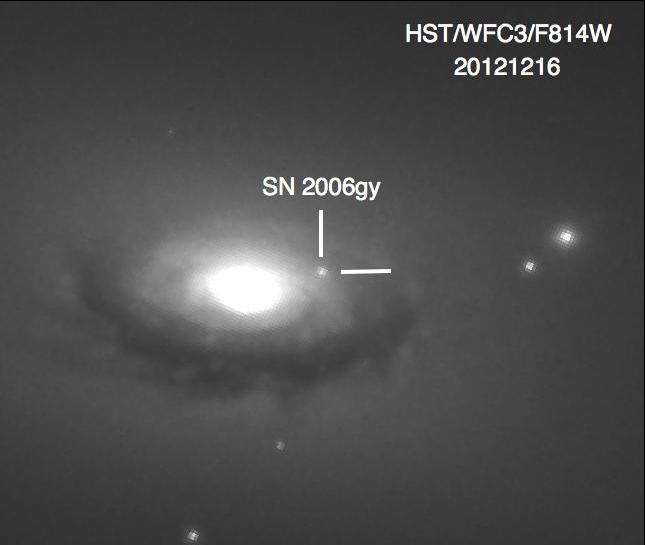 By modeling what elements could have produced the wavelengths of light SN 2006gy emitted, the team found that the stellar explosion must have contained iron — and a lot of it. Finding so much iron means the star that exploded was a white dwarf and not a large, massive star that collapsed explosively.

The wavelengths of light SN 2006gy emitted also showed that the explosion must have rammed into and interacted with a slower-moving shell of gassy material around it, as other astronomers had previously pointed out. The collision with the surrounding material likely causes the explosion to convert a lot of its energy into light and produce such a bright supernova, Jerkstrand said.

So the team came up with a scenario to explain both events. A dense white dwarf and a giant star with a stretched-out gassy atmosphere orbit each other in a binary system. The two stars are close enough that the white dwarf orbits inside the giant star’s gaseous outer layers. The resulting drag sends the white dwarf spiraling in toward the larger star’s core and also pushes gassy material outward.

If the white dwarf colliding into the larger star’s core caused the supernova, the explosion would interact with the ejected gas on its way out, as astronomers observed. But the team can’t yet say that this is the case with SN 2006gy, because they don’t know for sure that the inspiraling would lead to the white dwarf’s explosion.

“What we are saying is that if that happens, you get a supernova that looks just like 2006gy,” Jerkstrand said.