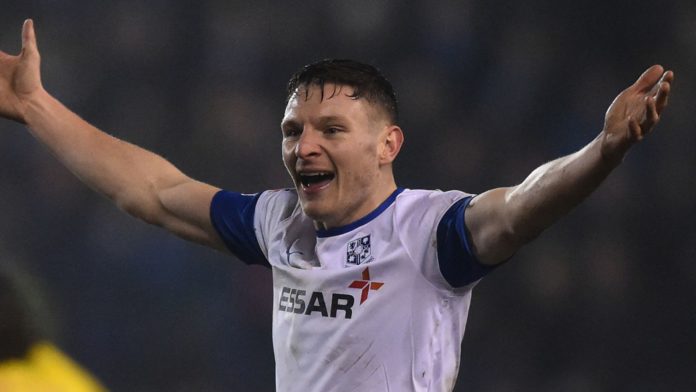 Paul Mullin’ extra-time header set up an FA Cup clash with Man Utd for Tranmere after a 2-1 win over Watford at Prenton Park.

Mullin met a flick-on to nod the League One side in front for the second time on the night in their re-arranged FA Cup third-round game, and knock out a youthful Watford side including four players making their first start.

The hosts had taken a first-half lead through Emmanuel Monthe’s finish from a corner, but after the break substitute Kaylen Hinds levelled up with a powerful finish for the Premier League side.

With little over 48 hours’ rest before Sunday’s fourth-round tie with United for the victor, the least either side wanted was extra-time but when a winner could not be found an extra half-hour followed, with Mullin’s goal a minute before half-time sparking euphoria for Micky Mellon’s third-tier side come the final whistle.

No one who started Tuesday’s defeat at Aston Villa featured in the squad, although five in the starting line-up played in the 3-3 first meeting between the two sides on January 4.

New signing Joao Pedro made his first start, having featured in the original fixture at Vicarage Road, as did under-23 players Mason Barrett, Callum Whelan and Joseph Hungbo.

Tranmere made one change from Saturday’s defeat to Ipswich, with Corey Blackett-Taylor replacing the cup-tied Alex Woodyard.

An upset looked on the cards as Tranmere took a 36th-minute lead through Monthe.

The centre-back, up for a Corey Blackett-Taylor corner, volleyed home off the inside of a post for a goal that was no more than the hosts deserved.

It was Monthe’s third goal in his last four games – he also struck at Vicarage Road as well as in Saturday’s 2-1 defeat to Ipswich – and was enough to give Rovers a half-time lead at Prenton Park.

Watford looked more dangerous after the break and they drew level in the 68th minute through substitute Kaylen Hinds.

The 21-year-old, who came on at half-time, drilled his shot through a crowd of players at the breakdown of a corner.

Rovers had chances to snatch the win but neither they nor Watford could find a breakthrough in the closing stages of the 90 minutes, sending the third-round replay to extra time.

An upset looked on again as Tranmere took the lead in extra time through substitute Mullin, who headed in at the far post.

Tranmere boss Micky Mellon on facing Manchester United in the fourth round: “I don’t think it’s an opportunity because of the form United are in.

“I know they have a threat. We have to make sure we are ready. We will give it everything we have got. There is no doubt we will be up against a good side.

“Two days is enough for us to be ready. We will be fine.”

Watford boss Nigel Pearson: “It was a tough game. We learned a lot about our young players tonight and I thought the senior players were excellent.

“Congratulations to Tranmere. For people who possibly thought we weren’t too interested in it, we were but we couldn’t risk too many first-team players.

“It (the pitch) is the same for everyone. They showed a lot of energy and desire. In the first half we were second-best in terms of desire.”

Tranmere are straight into a fourth-round home game with Manchester United on Sunday at 3pm, while Watford’s next game is at home to Everton on February 1 at 3pm.