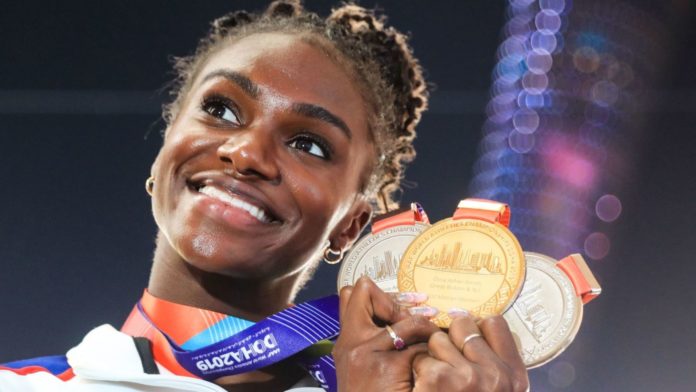 Great Britain’s hopes of improving on their record-breaking Rio Olympics medal haul at this summer’s Tokyo Games are set to be shattered, according to new analysis.

The latest Gracenote Virtual Medal Table predicts Team GB will win a total of 42 medals, 25 down on Rio, where Britain became the first country to win more medals four years after hosting a Games.

The statistics appear to contradict the expectations of elite funding body UK Sport, whose now-departed performance director Chelsea Warr said in December that she was “quietly confident” of eclipsing the total from Rio.

The Gracenote Virtual Medal Table is a statistical model based on individual and team results from previous Olympics Games, World Championships and World Cups.

It predicts 13 British gold medals, including Dina Asher-Smith in the women’s 200 metres and the men’s 4×100 relay team, as well as retained titles for the likes of Adam Peaty, Max Whitlock and Jade Jones.

Assuming a significant Russian contingent as ‘neutral athletes’, it also predicts Great Britain will slide from second to sixth place in the overall medals table, falling behind Japan, whose haul is expected to rise by over 50 per cent.

However, Great Britain surpassed the model’s expectations for Rio 2016, and with 42 athletes currently ranked fourth or fifth in their respective disciplines, there is optimism that the projected shortfall can be addressed.

Simon Gleave, head of sports analysis at Gracenote, told the Press Association: “Great Britain over performed our forecasts in 2016, winning 67 medals rather than the 56 we forecast just before the Games began.”