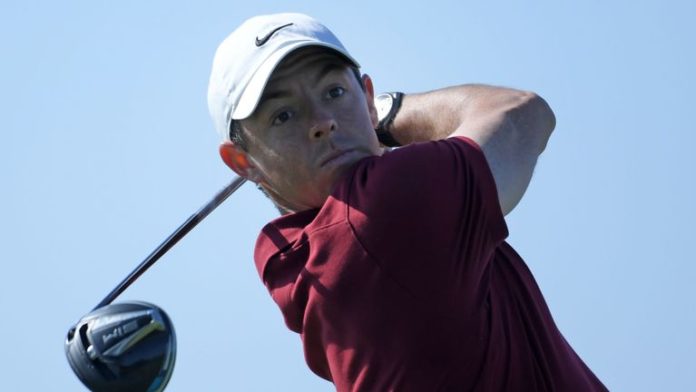 McIlroy happy with a 67, Woods just three off the lead but it was a tough day for defending champion Justin Rose.

Rory McIlroy gave himself the ideal platform to build on in his quest to regain world No 1 status as he ended the first day of the Farmers Insurance Open just one shot off the lead.

McIlroy’s driving was in particularly good order on the North Course at Torrey Pines, and his holing out was also impressive in a seven-birdie 67, while Tiger Woods opened with a 69 which he described as a “positive” start to the year.

But while golf’s two biggest drawcards prospered along with 2017 winner Jon Rahm (68), defending champion Justin Rose was unable to replicate the form he showed in Singapore last week as he struggled to a 75 on the South Course, leaving him with a big task to survive the halfway cut.

The consolation for Rose is that he will be playing the easier North Course on Friday, while McIlroy, Woods and Rahm take momentum to the South as both celebrated encouraging returns to competitive tournament golf.

Former PGA champion and Ryder Cup star Keegan Bradley kept a bogey off his card and made an eagle and four birdies in a 66 which earned him a share of the overnight lead with unheralded Dane Sebastian Cappelen, who defied the notion that the South Course is a tougher layout in his eight-birdie round.

McIlroy is the standout name in a group of eight players tied for third on five under, the reigning FedExCup champion getting his 2020 campaign off the the ideal start with a birdie at the long 10th on the North.

A fluffed chip on the 13th cost him a bogey, but his response was immediate as he birdied the next and, after a nice up-and-down for another gain at 17, he holed from 40 feet from the fringe of the 18th green for a bonus birdie which took him to the turn in 33.

McIlroy, who needs a victory to dethrone Brooks Koepka at the top of the world rankings, offset a birdie at the second with a mistake at the short third, but he picked up further shots at the fifth and ninth to make it a full-house of birdies on the par-fives.

His 67 was matched by two-time Masters champion Bubba Watson, who provided one of the highlights of the first day when he holed out from the fairway for an unlikely eagle at the 18th on the South, while Rahm is among another large bunch of players on four under after a 68 that promised to be much lower.

The Spaniard raced to four under after eight holes, but he managed only one further birdie after he also bogeyed the tricky third, outscoring playing-partner Woods by a single shot.

Woods made a nervy start when, after failing to take advantage of the generous par-five 10th, he bogeyed the 11th as his accuracy with his irons deserted him early on, although a welcome birdie at 13 steadied the seven-time winner.

He birdied the long 17th only to give the shot back at the next, but he was a model of consistency over the front nine and capped a solid performance with his fifth birdie of the round which leaves him in good shape to contend for a record-breaking 83rd victory on the PGA Tour.

The congested leaderboard meant that, despite being just three off the lead, Woods ended the day outside the top 20 on three under par along with the likes of Patrick Reed and Scotland’s Russell Knox, while Rose will look to repair the damage of his 75 when he tees up on the North Course early on Friday morning.

The Englishman had to dig deep just to stay at two over with three to play, but he then dropped shots at 16 and 17 – including a missed par putt of barely two feet, with a birdie at the last at least giving him a little momentum to take into the second round.