Home Culture Star Trek’s Patrick Stewart: ‘I wanted it to be more like X-Men’ 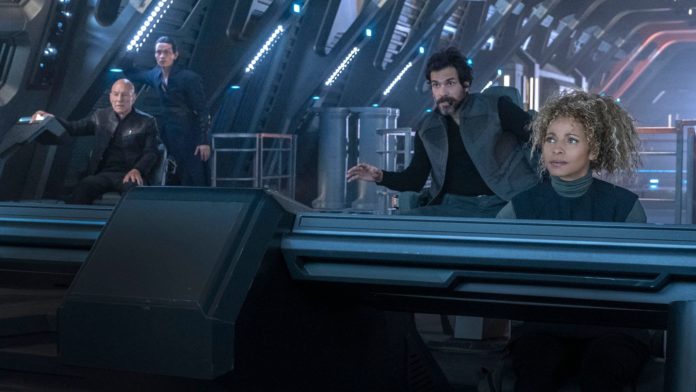 Sir Patrick Stewart says he agreed to return to Star Trek on one condition – they make the new series more like X-Men.

The 79-year-old told Sky News Backstage he was forthright in his negotiations with producers, saying he’d only be up for returning if the new season offered “a Logan-like situation”.

Stewart, who is as well known for his Shakespeare as his sci-fi, had steadfastly refused all other Star Trek offers over the last 18 years.

He first played Captain Jean-Luc Picard in Star Trek: The Next Generation back in 1987, with the TV series running for seven seasons.

He also reprised the role in four feature films from 1994 to 2002, but he said Star Trek: Nemesis would be his final appearance in the franchise.

However, all that changed when Star Trek: Picard came his way.

Stewart explained: “For so many years I’ve been saying that it’s over, I’m done, I’ve moved on. That my life has changed and my work has other interests now.

“But then these brilliant people came up with ideas that connected with my other interests. I was still nervous when I finally made the commitment to do it. I wasn’t sure that I was doing the right thing.

“But the longer I worked with all these people, I knew that they would not let me down”.

Novelist and screenwriter Michael Chabon leads the production, with Stewart himself taking an executive producer role.

The actor says he took a hands-on approach: “I lectured them all at the beginning, that if I was going to do it, this is what I wanted to do.

“I actually made notes on it. I had two very long meetings with the producers, and after the first one I sat down and put my thoughts on paper about where I wanted this to go.

“In order to illustrate it, Logan had just been screened and I said I want it to be, without referencing Logan at all, a Logan-like situation.”

The tenth in the X-Men superhero franchise, Logan is the final of the Wolverine trilogy with an aged Wolverine (Hugh Jackman) and ill Charles Xavier (played by Stewart).

Stewart explains that it was this gritty and dark approach that caught his attention: “In the film, Charles Xavier and Logan are no longer living the lives we had seen them living, instead Charles Xavier was living in what seemed to be an upside-down gas tank in a crappy old wheelchair and ranting and reciting nursery rhymes, and being scarily threatening at times.”

Stewart adds: “Logan was driving a nasty old limo and in Santa Fe in order to earn money to keep Charles in his medication.

“I mean it couldn’t be more different than X-Men, and I said that’s the approach I want to have for this, and God they came up trumps.”

Perhaps in homage, the Star Trek: Picard poster bears a strong resemblance to the Logan publicity shot, with Stewart’s silhouette set against a dusky orange sunset.

The series begins with the ex-Enterprise captain enjoying a quiet life on his vineyard – Chateau Picard – but his peace is shattered when a mysterious young woman approaches him for help.

Despite his love of the role, Stewart says returning to it after so long carried with it the weight of responsibility.

“I do feel protective. There have been several things that I’ve been asked to do, which I have declined because I felt that they were not authentic.

“And for me authenticity has always been vital in in the creation of a science fiction world.”

However, despite his closeness to the character, Stewart admits he had no idea the captain was 92 years old.

“I didn’t know I was so old! I only learnt it a couple of weeks ago. I always assumed I was my age and in fact it turns out I’m 12 years older.”

The series will feature some familiar faces from The Next Generation, as well as a host of new characters played by fresh actors to the franchise.

And such is the buzz around the show, a second season has already been greenlighted for next year.

Actress Whoopie Goldberg has been lined up to appear, after Stewart surprised her by asked her to be part of the reboot during a live TV interview.

Goldberg, who played bartender Guinan in The Next Generation for five years in the late 80s, has said she will be honoured to join the show.