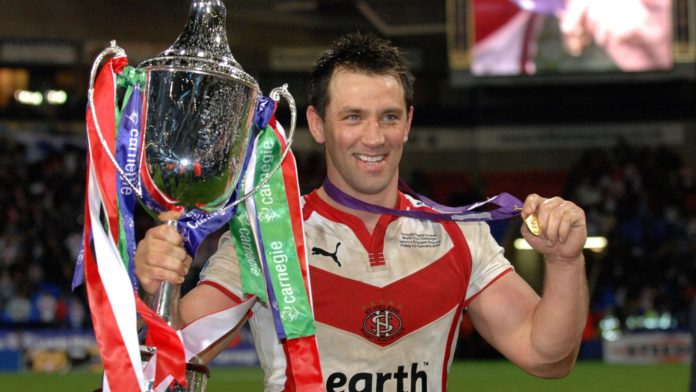 Watch St Helens take on Salford Red Devils in Round 1 of the 2020 Super League season – live on Sky Sports Arena on Friday, January 31 from 7pm

It may not be long before the name Sculthorpe is once again seen on a team-sheet in Super League, although not for the team many might expect.

Jake Sculthorpe, son of St Helens icon Paul, is a promising stand-off with Saints’ longstanding rivals Wigan Warriors, having been part of their academy for several years after being picked up from junior club Shevington Sharks.

His father, who was among those watching him in action for Wigan’s U19s in their recent Capital Challenge clash with London Skolars at the Honourable Artillery Company Ground in the City of London, is proud to see the 19-year-old making his way in the professional game.

“Obviously they’re the enemy from back in my day, but he’s been at Wigan a good few years now coming through the academy,” Sculthorpe said. “It’s been good watching him – he’s got a bit more flair than me!

“I don’t feel any older than when I played, but it’s mad to see. You look at my era of players and the players coming through, even in rugby union with the likes of Owen Farrell and George Ford.

“They’re lads whose dads I played with and against, but it’s great to see that next generation of names coming through.”

Sculthorpe began his professional career with Warrington Wolves, but it was at St Helens where he made his name in the back row between 1997 and 2008 as part of some of the stand-out teams of the Super League era.

A haul of four Grand Final and Challenge Cup triumphs, two World Club Challenge victories, consecutive Man of Steel awards in 2001 and 2002, plus being named in the Super League Dream Team four times, underlines how integral he was to those Saints teams.

It is no surprise the 42-year-old, who is now an ambassador for the club and pathways coach for the England team, was delighted to see the current St Helens squad emulate some of those past sides by sweeping all before them in Super League in 2019 either.

“We’ve been blessed at Saints throughout the Super League era with some great teams and last year’s team were certainly one of them,” Sculthorpe said.

“They were easily the most dominant team in Super League and obviously it was great to take the title.

“Hopefully it’s the same again this year and not much has changed other than the gaffer, really.”

We’ve been blessed at Saints throughout the Super League era with some great teams and last year’s team were certainly one of them.

That is because Justin Holbrook has returned to Australia to take over as head coach of NRL side Gold Coast Titans, with compatriot and former Tonga national team head coach Kristian Woolf replacing him.

Holbrook has left a fine legacy from his two-and-a-half years in charge at St Helens, with Sculthorpe in particular excited by the products of the club’s youth system who have come to the fore during that period.

“I think they were in that transition period with a lot of young players coming through and those players are now some of the best in our competition,” Sculthorpe said.

“It’s great to see players like Luke Thompson and Regan Grace, who came through the ranks at Saints to be pushing into the best performers in Super League.”

Aside from one or two departures, Woolf will have effectively the same squad to work with as his predecessor in 2020 as Saints aim to retain the Super League title.

Sculthorpe is watching with interest to see how the former Newcastle Knights coach shapes the St Helens team for the coming season.

“There are no real new signings because they’re not required, other than Kristian Woolf,” Sculthorpe said.