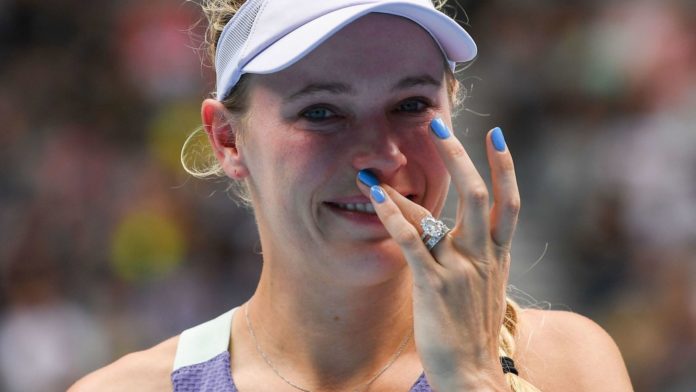 A tearful Caroline Wozniacki headed into retirement after defeat at the hands of Tunisia’s Ons Jabeur, ending her Australian Open hopes and her 16-year career.

The Dane announced last month that the scene of her greatest triumph, when she broke her Grand Slam duck in 2018, would also be the stage for her professional farewell at the age of 29.

Wozniacki battled to an excellent win over fast-rising teenager Dayana Yastremska in the second round and surely had her sights set on a fourth-round clash with great friend Serena Williams.

But Tunisia’s Jabeur had other ideas and her 7-5 3-6 7-5 victory made her the first Arab woman to reach the fourth round at a major.

Wozniacki looked like she had turned things around when she won the second set and then recovered from 0-3 in the third but Jabeur had not read the script.

Wozniacki held serve once to stay in the match but on the second occasion she went behind and an ill-judged HawkEye challenge set up a match point.

It’s been a great ride. I really am happy, I’m ready for the next chapter and I’m really excited about what’s to come.

A forehand over the baseline was the final act, and Wozniacki managed a joke through tears as she stepped up for a farewell interview.

“I think it was only fitting that my last match would be a three-setter, a grinder, and that I would finish my career with a forehand error,” she said of the stroke that has probably stopped her winning more major titles.

Congrats @CaroWozniacki on an amazing career. It was an honour to share the court with you today. Your fighting spirit has always inspired me and I wish you all the best in this next chapter of your life. You’ll be missed but I’m sure we will see you around.

Asked about her memories, Wozniacki said: “There’s so many things, obviously the achievements I had on court were amazing, the fans, the support I’ve had from my family, especially my Dad, who’s coached me all these years.

“Those are special memories that I’ll always cherish. It’s been a great ride. I really am happy, I’m ready for the next chapter and I’m really excited about what’s to come.”

What a career. We will miss you on tour. #CongratsCaro pic.twitter.com/7BOO2Mr3ep

The big screen played a tribute video from Wozniacki’s friends and competitors – this one significantly more appropriate than the one that tried to propel Andy Murray into premature retirement last year.

Wozniacki was then joined on court by her family, with Dad Piotr hoisting her high in the air.

The top seed faced Kazakh Elena Rybakina, who has soared up the rankings and won the Hobart International last weekend, but the Australian was in control virtually throughout in a 6-3 6-2 win.

Rybakina’s powerful game saw her break Barty’s serve twice at the start of the match but the local favourite soon managed to defuse the barrage of shots coming at her and wrapped things up in an hour and 18 minutes.

Greece’s Maria Sakkari produced a flawless performance in her first career meeting with American 10th seed Madison Keys to emerge victorious 6-4 6-4 in 75 minutes. The 24-year-old faces double Wimbledon champion Petra Kvitova in the fourth round after the seventh seed blasted past Ekaterina Alexandrova 6-1 6-2 in 58 minutes.