Home World After 100 days of rage, Lebanon has a new government — and... 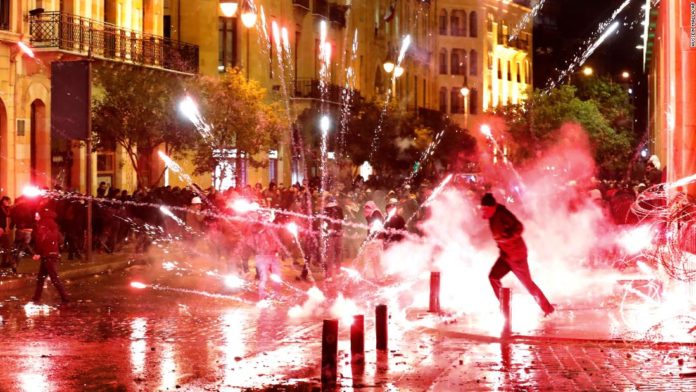 “Yeah bro, but we keep forgetting to do that. Save it as a reminder,” came the snarky response.
Hours later, plumes of black smoke billowed over Beirut’s skyline. Barricades of burning car tires cut through most of the capital’s main roads and highways. Travelers arriving at Rafik el-Hariri International Airport carted suitcases past throngs of angry protesters. Breaking news bulletins screamed through radios as drivers careened through the apocalyptic scenes.
“I remember going down to the streets that night and thinking ‘oh my, God. It’s actually happening,'” Fakih, 28, said, recalling the events of October 17 when Lebanon’s anti-corruption protests kicked off.
A hundred days later, Lebanon has a freshly minted government, led by non-partisan Prime Minister Hassan Diab and a cabinet of technocrats who are newcomers to the upper echelons of political power. Lebanon now has its highest-ever ratio of female ministers (six women in a cabinet of 20), including the Arab world’s first female minister of defense.
The government is also a third smaller than the previous one led by Saad Hariri, who resigned as prime minister less than two weeks after the protests began.
At the outset, the new government formation would seem to help satisfy the demands for change. In Diab’s inaugural speech, he hailed his new government as a “victory” for protesters.
But the protests — which recently escalated to riots — pressed on. A day after the announcement, scores were injured in clashes between protesters and security forces, as demonstrations spread from central Beirut to the outskirts of the city.
To many in Lebanon, the new government is too little, too late for a country mired in its worst economic crisis since its 15-year civil war. The country is buckling under a severe liquidity crisis, with informal and irregular capital controls being imposed across its banking sector. Layoffs and salary cuts are rampant. Fuel supplies have been interrupted, and food prices are soaring. Experts predict that the country could soon, and for the first time ever, default on its ballooning debt.
Despite being made up of largely independent ministers, the new cabinet is backed by a coalition of traditional sectarian parties, including the Iran-backed political and militant group Hezbollah. That coalition constitutes a parliamentary majority, voted in during elections in May 2018.
Like sectarian parties in Hariri’s US-backed coalition, the coalition that backs the current cabinet is being held responsible for years of widespread corruption and mismanagement that culminated in the current crisis.
“Sectarian political parties cannot resolve problems that they themselves created,” said Rania Masri, a university professor and member of the secular political party Citizens in a State.
“What is happening in the country is a complete economic breakdown and their actions in forming a government in the manner in which they’ve formed it … shows that they’re the ones that are divorced from reality.”
Few in Lebanon believe that the government has the wherewithal to tackle the current crisis, and to shake off the influence of dominant political parties. Even pro-Hezbollah newspaper Al-Akhbar has been critical of initial statements by the new government, and warned that this cabinet represented “the last chance” for the political elite.
But many prefer this to the political vacuum that followed Hariri’s resignation, in which the economy was in virtual freefall. Among other measures, the government can now regulate a banking sector that has arbitrarily imposed a liquidity crunch through limits on cash withdrawals on US dollars, that is seen to have disproportionately impacted small depositors.
Journalist and activist Jamal Ghosn says the new government is a “step in the right direction.”
“This is a cabinet that can be held accountable. They don’t have political and sectarian shields that previous ministers enjoyed. This is a good thing,” said Ghosn.
“I’m very pessimistic about the future and the economy. I don’t think any cabinet will work miracles. But is it better than the one we had? Absolutely.”

A cabinet independent of Iran and the US’s proxy battles?

A major concern some have with the new government is that it may find itself caught up in a proxy battle between Iran and the United States. The US has deemed Hezbollah as a terror group, and may view this cabinet as one of their making.
“There are some ministers in this new cabinet who are great. If we had a wish-list, we would have had very similar profiles,” said Nayla Geagea, a lawyer and member of Beirut Madinati, an alternative Lebanese political party.
“But today everyone knows that this was a government made by Hezbollah and (prominent Hezbollah political member) Jamil el-Sayyed,” she said. “We know today that to prevent the collapse of the state, you need international support.”
“The government should be completely independent of everyone else. We can’t become a scapegoat in the fight between Iran and the US today … if we still want a country called Lebanon to exist.”
In an interview with Bloomberg News on Wednesday, US Secretary of State Mike Pompeo was vague about whether Washington would engage with the new government.
“Lebanon has a terrible financial crisis that lays in front of it in just the weeks ahead. We’re prepared to engage, provide support, but only to a government that’s committed to reform,” said Pompeo.
He did not say whether the support would be conditioned on Hezbollah’s role in the government.
None of the current ministers are Hezbollah members, but the group has backed the new ministers of industry and health. One of those ministers, Imad Hoballah, is a US citizen who is a provost at the American University in Dubai.
Prior to backing Diab, Hezbollah repeatedly pushed for Hariri’s return as prime minister, stating that a Hariri-led national unity government in which Hezbollah’s coalition has strong representation would be their preferred option. It’s a configuration that is widely seen as being designed to shield Hezbollah from US sanctions, while reinforcing the group’s political power.

A country enters the abyss

Meanwhile, the country’s dual political and economic crisis is only expected to deepen. Protesters have vowed to escalate, and say that trust has collapsed. Analysts and politicians can do little to convince people that the new cabinet can stave off the effects of a possible economic catastrophe.
“These young people see that the authorities do not enjoy even a minimum amount of legitimacy,” said Omar Nashabe, professor of Criminology at the Lebanese American University and former advisor at the Interior Ministry. “Not on the level of the central authority, nor on a party level, nor on a local level, nor on a religious level. It’s lost all of its legitimacy.”
“Violence begets violence and there are people who are starving right now,” adds Nashabe.
Most activists and analysts agree that protests are likely to intensify. “I think the protests will continue and I expect the violence to be escalating on both sides … I expect the downslide to further economic and societal breakdowns to become even faster. I’m not at all optimistic about where we’re going,” says Citizen in a State’s Masri.
The government’s formation comes after the so-called Week of Rage, when protesters openly announced that they would do away with peaceful means. Stones, fireworks, and Molotov cocktails and other were lobbed at security forces. Bank offices and high-end shops were vandalized.
Security forces have violently cracked down on protesters with tear gas, sound bombs and rubber bullets. Some protesters have lost their eyes in the protest, sparking outrage on social media.
Every day in the past week, Fakih has left his house with a homemade gas mask, some vinegar, and a few rocks to throw at security forces. On the eve of the government’s formation, he went to the emergency room with a leg wound after security forces hit him with a rock.
“This government is all theater,” says Fakih. “There’s no way we’re going to give it a chance or our trust. We’re going to keep rioting until our demands are met.”