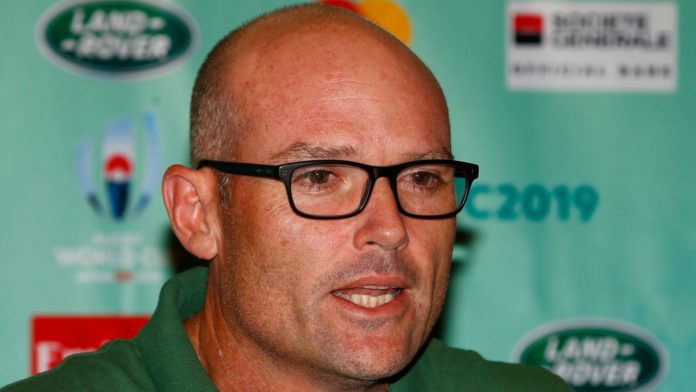 Jacques Nienaber has been confirmed as the new head coach of World Cup winners South Africa.

Nienaber steps up to the role after assisting Rassie Erasmus, who led the Springboks to World Cup success in November.

He was the defence coach for the side and credited with many of the team’s tactical successes in Japan.

The 47-year-old Nienaber has been the frontrunner for the job since Erasmus announced after the World Cup that he would step down as coach.

Erasmus, who will continue as director of rugby at the South African Rugby Union, said: “Jacques will be responsible for the test match preparation and day-to-day team operations but, as the director of rugby, I will be with the team for the majority of the time and in the coaches box with Jacques at matches.

“I’ll still be responsible for the strategy and results with Jacques taking operational control. The structure allows the director of rugby to spend more time on other aspects of the role.”

Nienaber is a long-time collaborator with Erasmus, having originally worked as a conditioning coach. He has never played top-class rugby or coached any senior team.

Nienaber is expected to be assisted by Deon Davids, former coach of the Southern Kings.

Irishman Felix Jones and backline coach Mzwandile Stock are expected to stay on the coaching staff but forward coach Matthew Proudfoot has been poached by Eddie Jones for England.

Nienaber’s first matches in charge will be two Tests against Scotland and one against Georgia at home in July.