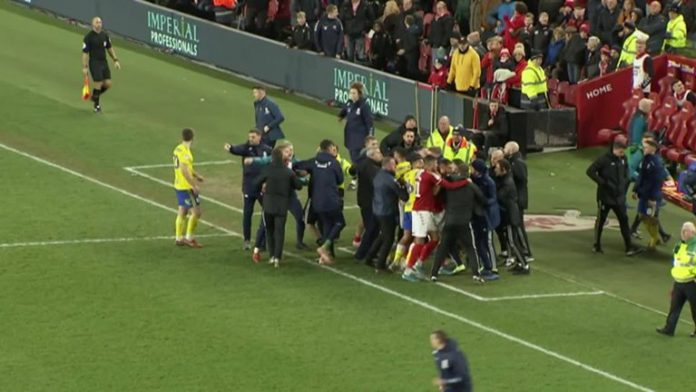 Middlesbrough and Birmingham City have been charged with failing to control their players’ conduct during the 1-1 draw on Tuesday.

There was a melee at the Riverside Stadium in the 87th minute after forward Lukas Jutkiewicz put the ball into the net late in the game for the home side, with the score at 1-1.

The fracas happened after referee Andy Woolmer brought play to a halt because Middlesbrough’s Marcus Tavernier was down with a head injury.

Coaches Leo Percovich and Sean Rush both received red cards as the incident escalated between the respective sides’ players and staff next to the two technical areas.

An FA statement read: “Middlesbrough and Birmingham City have been charged with a breach of FA Rule E20.

“It is alleged that the clubs failed to ensure their club officials and/or players conducted themselves in an orderly fashion and/or refrained from provocative behaviour during the 87th minute of their EFL Championship fixture on 21 January 2020.

“In addition, a Middlesbrough FC coach, Leo Percovich, and Birmingham City FC’s Head of Performance, Sean Rush, have been charged with a breach of FA Rule E3.

“It is alleged that their behaviour during the 87th minute of the fixture amounts to improper conduct.

“Both clubs, Leo Percovich and Sean Rush have until 28 January 2020 to respond to their respective charges.”

In his post-match interview, Jonathan Woodgate defended the referee’s decision but believed Woolmer’s treatment of the incident was heavy-handed, stating: “The referee has blown it out of proportion. It’s a fracas, it happens. It’s passion from both sides.

“It got the crowd going. Listen, if you see Leo is involved, I’m going to help him.

“I know Sean. Leo and Sean will meet after this, have a beer and kiss and makeup and whatever they do. I was charging down the line shouting, ‘Head injury, he’s got to stop the game’.

“But don’t forget, (Jutkiewicz) was offside when he scored anyway, so it wouldn’t have stood.”

Jutkiewicz opened the scoring in the 27th minute with Ashley Fletcher levelling for the home side nine minutes from the end to salvage a draw for Middlesbrough.

Woodgate’s side’s next clash in the Championship is against Blackburn on February 1, while Pep Clotet’s team face Coventry City in the FA Cup fourth round on Saturday.